Duran Duran, The Chemical Brothers and Missy Elliot... Bestival's headline acts are always huge and this year is no different. The past has seen the likes of Stevie Wonder, Kraftwerk and Bjork rock the main stage, which is closer to the size of Glasto's third biggest one (West Holts).

However, it's not just the top-line acts that keep Bestival's loyal — and notably fresh-faced — festival-goers flocking back each year to make the most of a fun fancy dress theme. The main acts might hinge on their novelty (stadium-filling) value but the surrounding stages are mostly about solid DJs and live dance talent.

The Big Top, The Port, Bollywood, Diesel Only The Brave and Temple Island are just a few places where dancelands most finest can be spotted this year, and — with a 'Summer of Love' theme — we're here dressed like a rave hippy to show you clubbers how to make the best of Bestival...

THE BIG TOP
Tops off!
Other than the main stage, The Big Top is Bestival's most popular stage, especially when it's raining but mainly because of its size and bookings. Host to the likes of Rudimental, Gorgon City, Jamie xx, Tame Impala and FKA Twigs this weekend, it's easy to see why, with its collection of more obvious dance sounds — played live and DJed — as opposed to obscurer, more underground names.

Unsurprisingly, the result is a crowd that isn't the most discerning, but not in the least bit chin-stroking, making it a reliable source of good times throughout the festival.

On Saturday, we find ourselves putting our personal prejudices aside to leap with ecstasy to the sound of 'Need U (100%)', 'I Got U' and 'The Giver', among others, whilst secretly nostalgically wishing for Duke Dumont's Dubsided and Turbo days.

Indeed, the vibe might be closer to 'Now That's What I Call Marbs' than the more caustic territory of his early work, but nobody can deny it's a great show. Exploding confetti, bouncing orbs and spellbinding visuals make up for set that lacks dimension but keeps energy levels peaking. Chart house hit after the next, Bestival's unpretentious crowd are suitably pleased — and we'd be lying if we said we aren't too affected by The Big Top's huge and infectious vibe.

MAIN STAGE HIGHLIGHT: ANNIE MAC
Not too long ago purists were cursing the sight of a DJ on a festival main stage. With the dawn of EDM, it's become much more frequent, but it was Rob Da Bank who was doing it way before the US got their mitts on dance music (again), filling downtime between live sets by entertaining tune-spotters with his house, disco, tropical breaks and Afrobeat records. 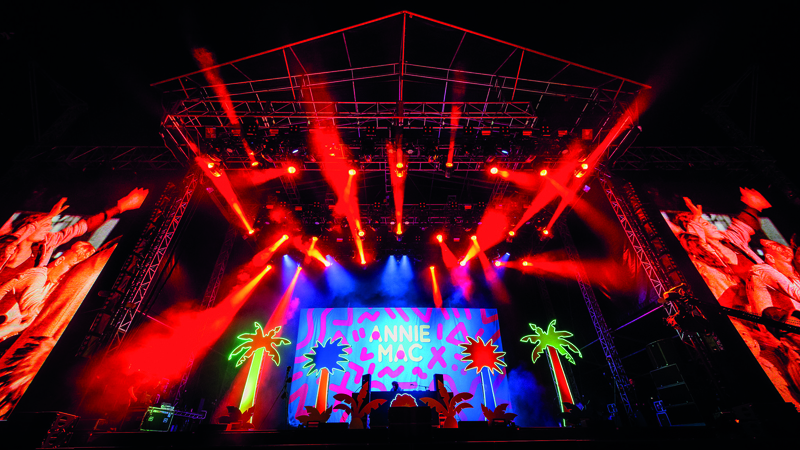 These days, however, with the UK house explosion, DJs are now deemed important enough for an actual, main slot on the bill rather than filler, and who better than UK house dame Annie Mac?

With the help of LED palm trees and a neon backdrop, the Radio 1 icon commands the stage with as much gusto as any four-piece band. She's on the mic, hyping the crowd as her energetic bassline house bangers — immaculately mixed — send 20,000 clubbers completely bananas on the Bestival hill.

The Eats Everything remix of Tiga's 'Let's Go Dancing' is just one tune that receives a chorus from the crowd, before a euphoric finale of N-Trance 'Set You Free' hits the “summer of love” theme right on point and has the place going mental. Not one for die-hard house heads, but this sure is fun!

THE PORT
Let's get naughty-cool!
The Port, also known as HMS Bestival, is huge! A gigantic shipwrecked vessel at the end of the field, with space for 10,000, stacked with a monstrous Funktion One soundsystem, it's the biggest stage here dedicated only to DJs. 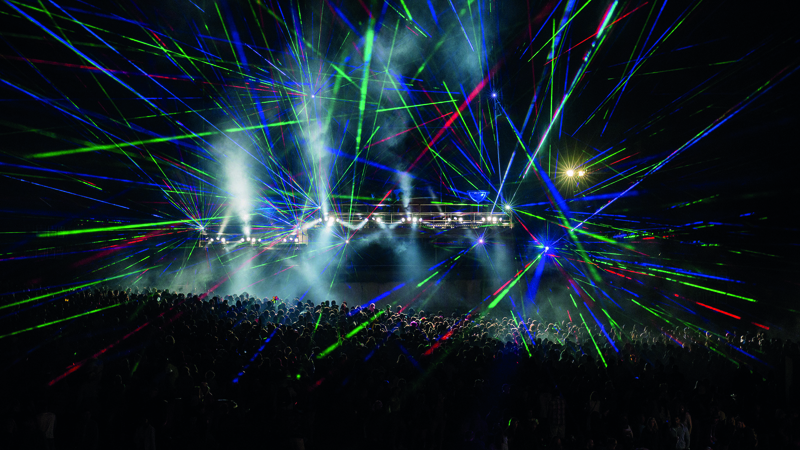 We arrive on Friday afternoon to the sound of Greg Wilson digging out Larry Levan's remix of The Joubert Singers to a joyful collective. Horse Meat Disco follow up with more disco classics, before Guy Gerber does his best impression of someone pleasing the lowest common denominator.

Disappointing for those expecting the majestic melodies of his usually absorbing deep, druggy sets, his set sadly is no journey. Instead it's a jumble of pad-heavy deep house and stripped back techno followed by a flat series of brain-numbingly relentless — and grey scale — tech house thumpers, which leave Tale of Us no room to drop it down into more spacious sounding techno territory.

It's a real shame that clearly underestimates what this clued up crowd are after, only serving to confuse rather than conjure the trippy dancefloor environment we hoped for.

We hear Kiwi and Andrew Weatherall team up for a newbie verses veteran tag-team on Saturday afternoon. The low-slung beatnick disco-tech from the Love From Outer Space man meets the chunky, earth-shakingly robust robotics of Kiwi's 'Short Tail', and this (male) correspondent laying in the grass dressed in a pair of yoga pants, a furry gillet and a feathery headdress thinking, “That's more like it!”.

But sets aside, it's the sheer girth and humungous sound that makes The Port Bestival's most impressive dance stage. This is no boat party, it's a boat rave!

BOLLYWOOD
Spice of life
More like the setting for a huge hindu wedding than your average festival tent, this marquee with a cocktail bar — for obvious reasons — is a favourite amongst serious clubbers with a flavour for fun.

On Friday, DJ Q throws together bassline wobbles like DJ EZ on GHB, with enough spin-backs to give Andy C whiplash. Despite our desire to hear a tune in full, we've no qualms about bouncing around to the sound of Trumpet & Badman (his collaboration with DJ Haus) in a ruby red tent with Indian rags draping down from the roof.

The vintage sounds of Norman Jay attracts a older collection of heads on Sunday afternoon, who rejoice to the sound of Stevie Wonder's all-time classic 'As'. It's an emotional moment and the perfect lift for a crowd with heavy legs and lacking serotonin on the last day of the festival. 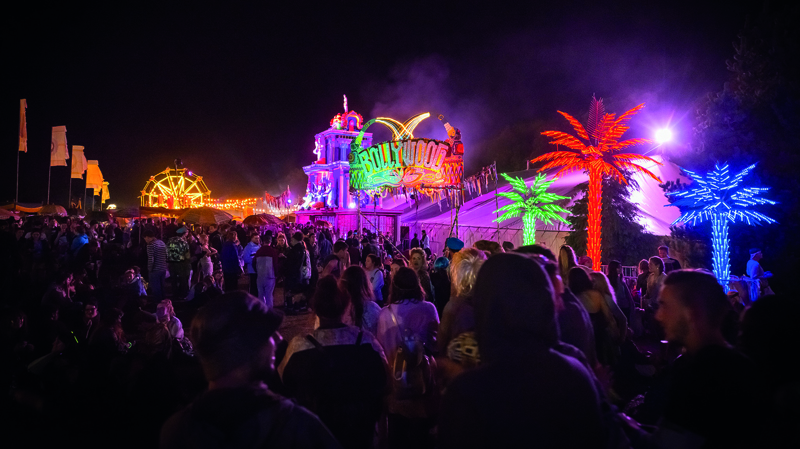 But after dark is when Bollywood really lights up. People are squeezing to get into Ben UFO's after the main stages closes on Sunday, and we're amazed by the sight of lit-up palm trees, a large pink Bollywood tower of elephants and a fluorescent big wheel in the distance. Not many festivals can rival the awe-inducing magic of Glastonbury, but this field certainly comes close.

MAIN STAGE HIGHLIGHT: JUNGLE
They may have become the stuff of prime time TV ads, but their show on Saturday afternoon proves exactly why they're the soundtrack of summer 2015. The calypso rhythms and live brass of their band is as tight as it gets. 'Busy Earnin' is a rousing festival moment — even for the more stiff-lipped among us.

DIESEL ONLY THE BRAVE
Diesel power!
A no-frills stage with a solid soundsystem, Diesel Only The Brave plays host to the likes of Psychemagik, Eton Messy, Paul Woolford and one of Jackmaster's many sets this weekend. Situated in the Magic Meadow, next door to Temple Island, it does everything a third-wall dance stage needs to, adding yet another top quality place to dance our socks off this weekend.

TEMPLE ISLAND
Our body is a temple
A cauldron of ear-piercing noise with a raised booth facing a platform crammed with dancing mentalists, Temple Island is a spot perhaps unrivalled in terms of clubbing energy at Bestival this year.

We walk in to get bombarded by the sound of UK-flavoured future house from Disciples — heavy with bass but clean on production. At other times, the likes of A Sagittariun, Flight Facilities and Luke Vibert can be found dropping bombs here, making for a diverse selection of DJs to satisfy all walks of switched on raver.

SUGAR SKULLS
Feed your head
A diminutive stage under a canopy with beds to lay over and crates to dance on, this Mexican-themed tent contains a stretched camper van selling ice cocktails and a meaty Void soundsystem.

We find ourselves elated by the sound of Hauke Freer's funky low slung mover 'XK' late on Friday, as House of Disco deliver a lesson in laid back cool, before Joe Roberts drops everything from Hall & Oats to Cheryl Lynn and Midnight Magic on Sunday afternoon; so good it gets a 9-year-old MJ impersonator to work his stuff in front of a delighted dancefloor.

THE GRAND PALACE OF ENTERTAINMENT
What a drag!
From the outside, The Grand Palace may look like a pony open-air drag show, but don't be fooled. Look beyond the stage and you'll find big, sweaty tent hidden behind a hill where we find Sink The Pink getting their razzle on to the sound of 'Barbie Girl', 'YMC' and 'Toxic' by Britney Spears until 4am. This sweaty cabaret of gay is the place to really let our glittery wigs down.

NANDOS: RULE THE ROOST
Chicken out!
Rather than opting for a chicken-only music policy ('I Feel Like Chicken Tonight', 'Birdie Song', 'Funky Chicken'), Nandos have gone all out this year. With a DJ booth above the kitchen — dubbed the “Cock 'o Van” — and a DJ roster consisting of Jackmaster, Mistajam and this correspondent, it's has no trouble pulling a crowd... and not just for the chicken! 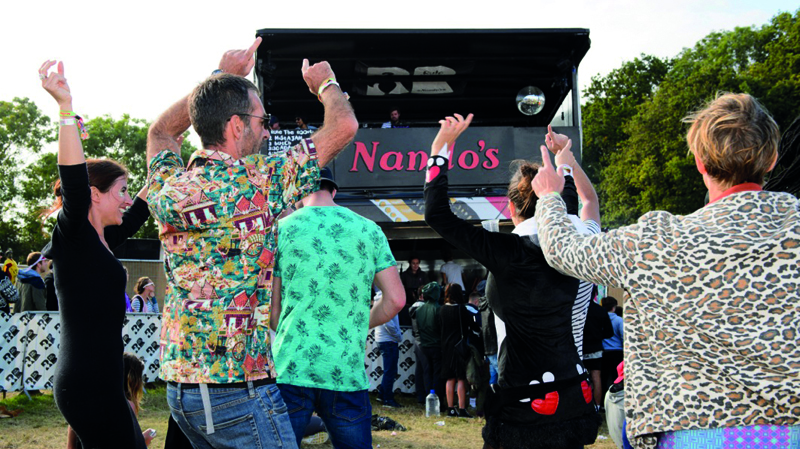 MAIN STAGE HIGHLIGHT: MISSY ELLIOT
No Bestival would be complete without a bonafide superstar and this year it comes form of a closing set from Missy Elliot. 'Lose Control', 'Work It' and 'Get Your Freak On' all get outings in the rain, while her dancers b-boy wearing white masks and black baseball jerseys.

Brought on stage in a giant pyramid, the hip hop's queen of bling is clearly full of beans, spitting lyrics and connecting with the crowd in between energetic routines. It's a show of epic proportions matched by a jaw-dropping explosion of fireworks at the end.

Soundtracked by 'Love Is In The Air' and 'All You Need Is Love', we're treated to heart shapes in the sky, streaming stars and glittering tulip-like formations, all greeted by collective “oohs” and “aahs” from the hugging congregation. 2015 is the year Bestival has found love.