In the lead up to his all-night headline show at Wembley Arena (the first of its kind) and following his glorious return to London’s SW4 festival, drum & bass boss Andy C opens up about his passion for DJing, giving new artists a platform — and his love of the beautiful game…

Andy C is famous for his all-night sessions behind the decks. Exactly how many thousands of people have witnessed him spanning the many eras and sub-divisions of the drum & bass genre all the way to sunrise over the last decade is hard to pinpoint; but given that his last epic session in London was at the massive Alexandra Palace, having previously sold out Brixton Academy twice, we can only guess it’s well into six figures.

On the other hand, quantifying how many have witnessed the Ram Records chief attempting to cram all that same excitement and energy into a mere 20-minute set is a little easier. Tonight, Andy is in the upstairs room at the Old Queens Head, a pub in Islington, North London, and his audience can barely number more than 50 people. The lucky few, who are being fed and watered, or rather lagered, courtesy of Andy, are a mixture of friends, family, journalists, label crew and a couple of dozen fans whose names were pulled from a hat on the day tickets for Andy’s Wembley Arena show went on sale.

The reason for the brutal brevity of the Essex DJ’s set is simple: he’s the half-time entertainment during a screening of England’s World Cup group game against Belgium. His appearance behind the decks euphoria — the looks on his fans’ faces seem to be of utter disbelief that such a legend could really be playing in such a humble space. Everywhere you look in the room, people are dancing wildly, mobile phones held aloft in order to catch the moment for posterity. This briefest of timeslots doesn’t phase Andy, though, and he rapidly chops and changes his way through a mixture of up-to-date underground tunes and well-worn anthems, the one eliciting the biggest reaction undoubtedly being the classic that first put Andy on the map all the way back in 1993, as part of Origin Unknown: ‘Valley Of The Shadows’.

Of course, the very moment that Gareth Southgate’s men trail back onto the pitch for the second half, Andy quickly curtails the music. He takes football very seriously, as we’d already discovered a few days earlier when we caught him enjoying a rare weekend out from his ultra hectic schedule. “My first weekend off,” he laughs, “and my last until I don’t know, September, October time, I think.”

So what did he get up to on his rare Friday night off? Silly question really. “I watched football, then I watched more football, then I watched the highlights of the football. And then I went to bed! It was like, ‘switch brain off, engage in football!’ And yeah, I was in bed before midnight. I’m out tonight, so we’ll see how tomorrow goes. Tomorrow’s a barbecue — and more football! England’s on in the afternoon.”

"I do scan the audience and I do have a regular crowd that I see, and that’s absolutely beautiful and amazing"

Despite the diary full of bookings across the world, Andy rarely misses a home game of his beloved WestHam, where he’s a season ticket holder. This often necessitates a mad post-match dash to the airport. “Everyone says ‘you’re mad’, but pretty much whatever it takes, I’ll get the first flight and go straight from the airport to the stadium, or I’ll go and watch a game and run out and go to an airport, or go to a gig. If I can help it, I won’t miss a game.”

He must be a regular at City Airport, we deduce, which is a stone’s throw from the Hammers’ new home at the Olympic Stadium in Stratford. Sadly not. “If I was a city boy and I was a banker, it’d be perfect. But the thing about City Airport, there’s not enough destinations. I think there’s been one game where I’ve gone to City Airport after, but more often than not it’s jump in the car, round the A406 up the M11 and off to Heathrow. Which is tight!”

His love of football is also at least part of the motivation for his latest London show, the first ever all-nighter at Wembley Arena on 17th November, which he describes as “an absolute dream”. That was before the news it had sold out in just three days.

“I just can’t believe it,” he laughs, still clearly a little incredulous at the size. “I mean, obviously we’ve been planning it, but it’s still a bit like, ‘Is this really happening?!’ I’m so proud and honoured to do it. It’s such an iconic name isn’t it, Wembley? For them to open their minds to doing an all night show, and giving me the honour of being the first ever one, you know... I’m pinching myself, it’s surreal.” How will he approach playing such a massive show? The same way he approaches every show, it transpires. “I think you read it as the night goes on, don’t you?” So it won’t be a case of meticulously planning out every last minute of the epic set? “No, no. That’s a false economy,” he reckons, “Obviously I practise and I learn all my tunes. But if you feel it’s going a certain way, I tend to think, ‘OK, we’ll go that way, we’ll go that era’.

Because you can’t chop and change between 2018 tunes and 1994 tunes, it’s not going to work, so you’ve got to work out a match of tunes in that regard. But I’m going to be playing five, six, seven hours — depending on whether they actually want to chuck me off at 5am. I’ll keep going if they don’t. We did one Brixton one and I think I was scheduled to stop at 6am, but I don’t think I actually stopped until quarter to seven in the morning. All the lights were on.... I might have been a bit inebriated, but you know, eventually they got me off!”

There are certain elements which are dead certs, for sure. “I start, and I go in hard, hard and energetic. Because my thing is, I’m full of pent up energy, and everyone there is just hoping it’s gonna be a good night. So I’m like, ‘Right, let’s go!’ But there’s always a slight fork in the road after a short while into the set, and that kind of tells me where we can go. I might go completely.... ‘Let’s go to another era’. Then, depending on the reaction I think, ‘Yeah, we’re all in this, we’ve got a whole generation of people here and we can do this’. But I do it on the night.”

He loves the luxury of having a lengthy set to play with, a chance to “really take it deep and nasty”, and please different elements of an eclectic and wide-ranging crowd. There are people who want to hear new stuff, he recognises, people who want to re-live their memories and different sectors who have their own golden eras of d&b. As it has been for him since his very first days as a DJ, Andy says the experience is still very much a two-way street, and in a much more detailed way than simply feeding off the crowd’s energy.

“Having been around a while,” he says, “doing shows at the Wax club and then going to The End, then Fabric and then the bigger gigs and the festivals, I look out into the audience and I see people from those eras and I think, ‘Right man, I’m going to spend 20 minutes or half an hour playing that vibe for you fellas’. “I do scan the audience and I do have a regular crowd that I see, and that’s absolutely beautiful and amazing, because there’s faces I see in that crowd from Wax club days, we’re talking ’93 and ’94, and then there’s crew from The End... So that gives me something to work on. I think, ‘OK, if I play some of those tunes then you and your crew are going to be vibing, and then that will hopefully ripple through the crowd around you, and then it becomes sort of like a ripple effect. And that’s how I treat the longer sets. I always like to build bridges between sections of tunes in a set instead of it just being a cut and paste mishmash of bits and bobs." 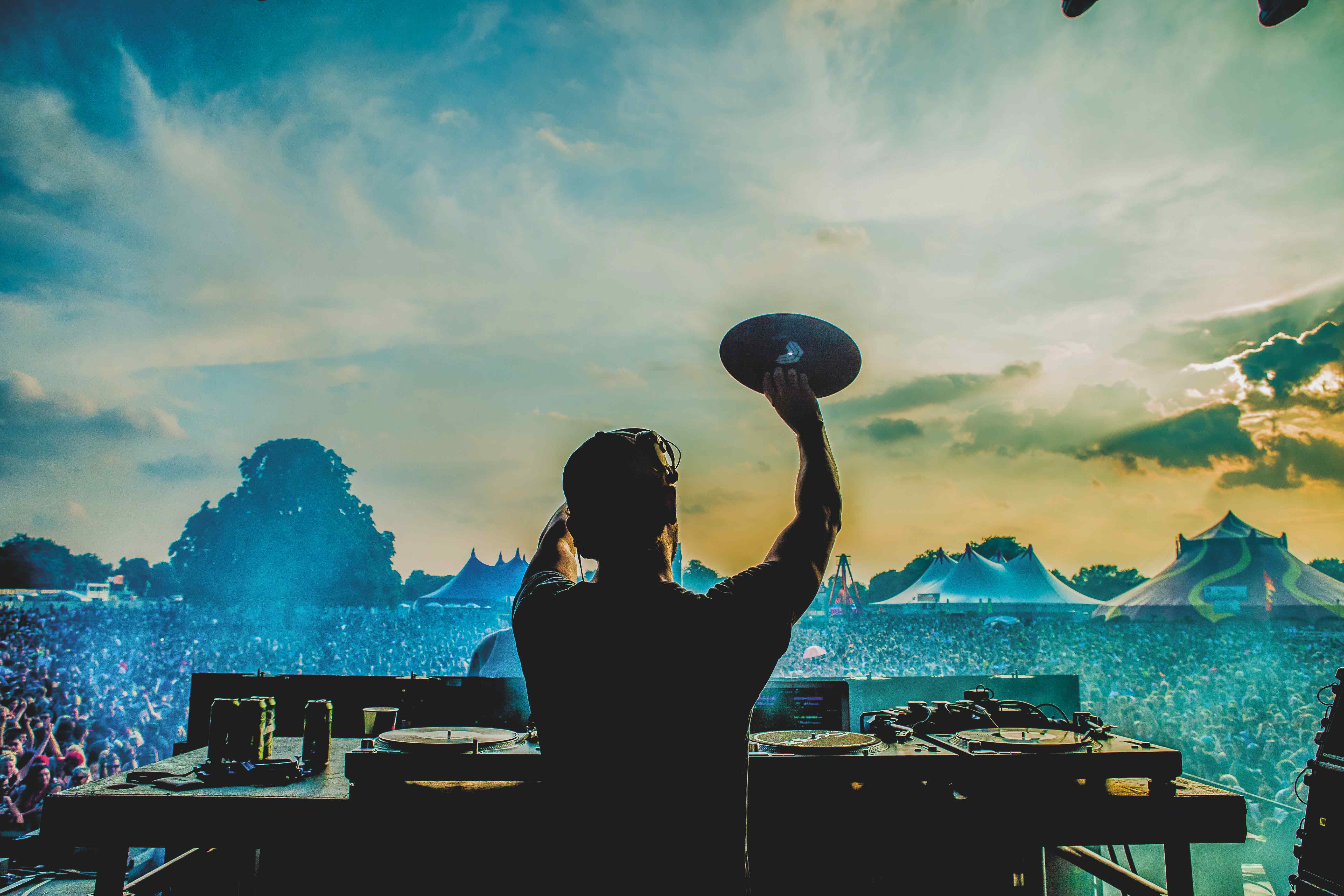 He still takes a day off pretty much every week to practise his DJing, because he finds going out to play without knowing his set and mixes inside out to be a deeply unsatisfying experience. Of course, since the digital revolution, and given the fact that everyone in drum & bass wants him to play their tunes, he’s always got a massive stack of new music to go through, too. “It’s an outrageous amount of music,” he laughs. “I think this morning, I’d set myself some time to go through new tunes and promos and things I’ve been sent this week, and I must have got about 22 new tunes to play. It might not sound that much, but to a house DJ that’s about an hour-and-a-half. I don’t mean that disparagingly, but the way I mix, it’s not quite as long.” There is a slightly different agenda depending on the show ahead though. If it’s a small, intense club, he says, then it’s definitely great playing and breaking new music. But with a festival in front of 10,000 punters, he explains, and especially if there’s a mix of genres beyond d&b, the emphasis falls more firmly on tracks that people know and love, and appealing to a wider, non-partisan audience.

But there’s room for both types of gig and both types of show in Andy’s world. His recent residency at Shoreditch club XOYO, for instance, was an opportunity to play the most underground of selections. Ever the perfectionist, or perhaps more accurately ever the enthusiast, Andy watched back one of his XOYO sets on YouTube, paying tribute to the person who’d filmed it: “He must have a concrete arm, because it didn’t move at all”, and taking note of the whoops, hollers and whistles from the crowd that he’d missed with his headphones on and the monitors ‘screaming’ at him.

Want more long-reads from DJ Mag? Check out some of our previous cover features on Anja Schneider and Monika Kruse.

News
Meet the World’s No. 1 DJ and win a Pioneer DDJ-1000 controller