Enigmatic breakcore and dark ambient innovator Christoph De Babalon delivers 150 minutes of engulfing atmospheres and harrowing rhythms in our first Podcast mix of 2019. We meet the revered cult figure to discuss critical resurgence, his forthcoming release on A L T E R, collaboration, fragility and being a reluctant prophet of doom

Few artists submerge you in darkness in quite the same way as Christoph De Babalon. With engulfing ambience, depth-charge bass drones and hyperventilating breakcore and jungle beats, the Hamburg-raised, Berlin-based producer has, for over two decades now, etched an unmistakable sonic persona onto an increasingly greyscale planet.

With a catalog spanning over 20 singles, EPs and albums across labels like Digital Hardcore Recordings, V I S, A Colourful Storm and his own Cross Fade Enter Tainment (CFET), de Babalon has consistently captured contemporary dread with a rawness and candour only available to those for whom the feeling is not a fleeting fixation, but an overwhelming norm.

How fitting then, that in 2018 – a year which saw acts like Low and Gazelle Twin deploy harrowing production techniques to decry socio-political calamity – De Babalon’s enduringly sinister 1997 LP, ‘If You’re Into It, I’m Out Of It’ would be reissued. The limited vinyl repress in January launched the sprawling collection far past its once cult status, and dragged new ears into its depths. Where the likes of John Peel and Thom Yorke were among fans of its original pressing – the Radiohead frontman called it “the most menacing record” he owned before inviting him to play support on their ‘Amnesiac’ tour – the remaster ignited a long overdue interest in his work, making it tempting to elect him as the sonic director of an impending apocalypse. But De Babalon doesn’t see it that way at all.

“Look, if you make a dark record it will fit with almost any time,” he tells DJ Mag over a distorted phone line. “There are dark records from the ‘20s. There is dark music from the 19th century. It still fits now. The dark records that are being made now might fit in 20 years as well.”

Christoph de Babalon isn’t interested in being a spokesman for doom. He apologises more than once when conversation steers toward his dour mythology. He laughs off the idea that his music is anything more than a necessary personal pursuit, and he certainly doesn’t think the world had to hit this particularly low tide to properly appreciate the 15-minute drone dirge of ‘Opium’ or the convulsive percussion of ‘My Confession’.

“The world was bad when I made [‘If You’re Into It, I’m Out Of It’] too,” he says. “and it was bad 10 years before that in the ‘80s when I was listening to thrash metal and Napalm Death. All these people were aware of where the world was heading and were critical of it then too.”

Armed with a dry sense of humour, De Babalon doesn’t succumb to persistent darkness, but does, as he says, “put a leash on it. I don’t let it take me over.”

“I need to do it for my sanity,” he says. “It's just a way for me as a person to deal with all the negative influence and turn it into something that is creative. It sounds very idealistic maybe, I don't know, but it could be something like that.”

“I don't think it's right to be nasty and negative all the time,” he adds, concerned that his music could make anyone feel ill at ease. “That would be terrible... To be inspiring to people like that. I want to...” he pauses. “Maybe it sounds silly. I would like to communicate with my listeners that there is darkness in there but there is also this fragility. There are harsh beats but there will always be parts of the tracks that are fragile and imperfect. Vulnerable in a way.

There is sensitivity and vulnerability to be found everywhere in his catalog, revealing itself just as you become willing to hear it. ‘Brilliance’ from ‘If You’re Into It...’ is a warm bath of gossamer synths which cleanse the listener’s palette before the record’s ferocious final push. ‘Fairreality’ on 2015’s ‘Short Eternities’ LP has its breakcore growls tempered by cascading chimes and a glowing outro. On 2017’s V I S released ‘Grim Zenith’ – an EP he credits as being the root of his critical revival – the track ‘Pure Dirge’ indulges in its grim weight while still offering subtle moments of poignancy beneath the shroud.

More recently, on his forthcoming EP for Helm's A L T E R label, ‘Shivers and Shakes’ he offers an uncharacteristically spritely rhythm, dropping away from his usual 170 BPM hysterics into a chirpier 110. It’s one of several subtle tricks that have proven his evolution over time, which has seen him cutting the distortion in exchange for a more refined, crystalline abyss.

“It's a good feeling that people are interested in the music I'm making now,” he says. “Even though it's flattering that 'If You're Into It, I'm Out Of It' is such a, I don’t know, ‘legendary’ thing, I kind of really need the appreciation of the music I'm making now a little bit. If some people hear the old stuff and then hear ‘Hectic Shakes’ or what's coming out in future they might be surprised. Maybe they'll miss the noise. I have changed a little bit... But I think it's better.”

Christoph started producing in the early ‘90s. Drawn to the aggression and pace of hardcore UK hip-hop, he bought his first sampler and, with no formal musical background, just started mashing the sounds that appealed to him together. “I always thought American hip hop was too slow until Public Enemy came around,” he shrugs. “The UK stuff, though, I was lucky that I had a guy in my class who was in a UK style rap group in Hamburg. They had this guy making beats and sometimes he gave me tapes with the instrumentals.”

“After that, I was just watching movies and trying to find that little one second where there was just a drum kit alone,” he adds. “And listening to terrible funk records where was one drum break somewhere. I mean, that was before I could get my hands on sample CDs.” 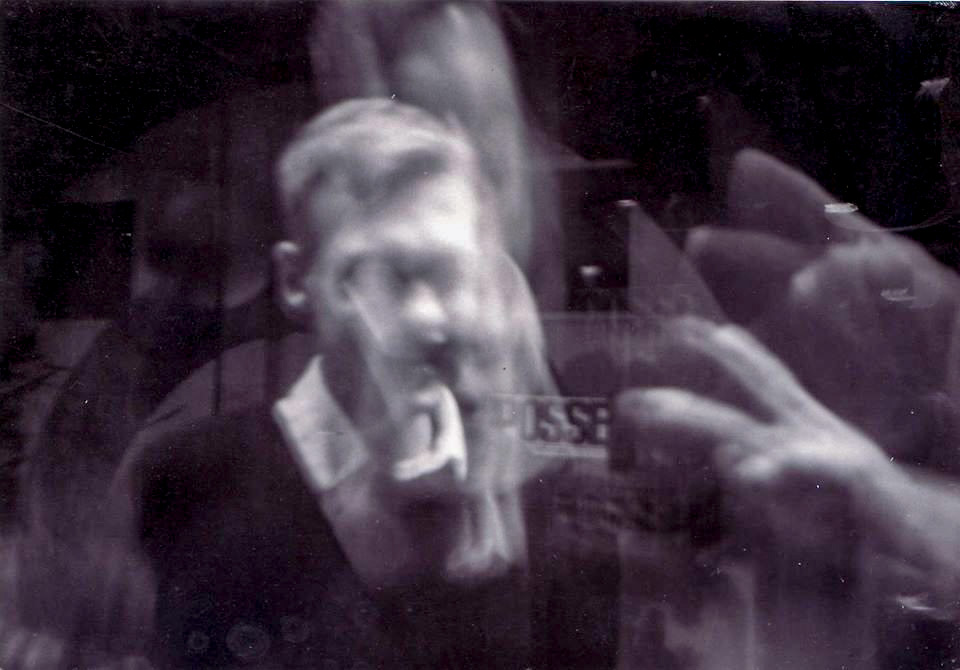 The ghostly intensity came from influences musical and otherwise. He discovered the often horrifying works of William Burroughs through the industrial and punk bands who referenced him, and later fell in love with the stark moods of paintings by Gustave Doré. He recalls staying up late at age 10 to watch the TV behind his parents back, only to stumble upon Andrei Tarkovsky’s tense psychological sci-fi flick, Stalker.

“There's a lot of people who deal with the heavy stuff,” he says. “The dark stuff, the heavy stuff. One of the greatest motivations for doing anything is pain and terror.”

More than the Throbbing Gristles, Merzbows or Deathprods of the world you might have expected to to see on De Babalon’s radar, he was, and remains, much more interested in the works of composers like Penderecki and Rachmaninoff. “They had this really heavy tone to them, and were also experimental sometimes,” he explains. “That's what I wanted to put together. Sometimes with beats, sometimes without beats. I just wanted to make a heavy experience with the humble machines I had back then. I like the warmth of orchestral music and not just a noise loops going on for 30 minutes with someone screaming over it. That kind of thing wears off quickly, I think.”

That fascination with orchestral styles came to the fore in October last year with the release of TEYAS’ debut LP via Warsaw label, Bocian. A collaboration between De Babalon and experimental A/V duo WIDT. The five track album fuses the ominous abstraction of his own work with the haunting operatic vocals of Antonina Nowacka. In a live setting, the sounds meld with the psychedelic visuals of Bogumila Piotrowska to provide the multi-sensory experience De Babalon has always wanted to explore but has never had the means to achieve out of a refusal to leave artists unpaid.

“The only trouble I have is that I never see anything because I'm on stage!” he laughs. “But I'm very happy to have WIDT take care of the video part so brilliantly. It fits so well. It has something very classical about it but it's very mesmerising.”

With a catalog of distinct album artwork behind him, is visual work and collaboration something he’s keen to explore further?

“I would really, really love to have some proper video clips, yeah,” he says. “I'm not so much a visual person, but I can tell you that I like something if you show me it. I just don't know how to make it visible. But I have been working with the artist Ian Liddle for a couple of covers and we share the same kind of ‘serious’ vibe, I think. I think they fit. “I'm quite open though you know,” he chuckles “It should just look great and timeless in a way. It can even be a colourful thing. Something nice. Kittens!”

Film scoring too, is an area that, with a world of possibility opening up, Christoph would be keen to explore. And it’s not as if he hasn’t shown his chops in that field below. Albums like ‘Invocation Of The Demon Twin Vol. 1’ and 2008’s ‘Scylla & Charybdis’ found him working with a narrative arc to create his most haunting works to date. Between 2003 and ’07, while taking a break from “the biz”, he worked as a composer for theatre, with music written for plays by classical writers like Schiller as well as a stage adaptation of Trainspotting.

But what kind of movie would he want to score now?

“Or it could be a sad romance... Or something like that. Probably not comedy. A dark comedy, maybe. I like comedy” 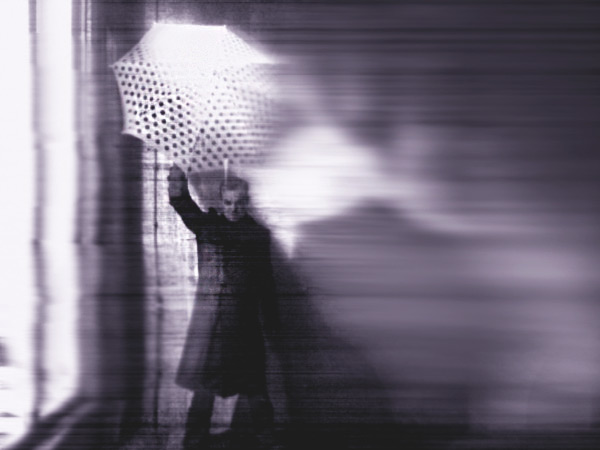 Unpredictable at every turn, the greyscale planet is opening up for Christoph De Babalon. With new releases in the works both individually and with TEYAS, and with the potential for further collaboration with visual artists and others becoming all the more realisable, the once enigmatic figure seems more than ready, at last, to claim the status he has long deserved.

As part of our Podcast series, De Babalon has conjured up 150 minutes of dark ambience, intense jungle, hardcore and experimental techno, released an unreleased, from friends, old favourites and new discoveries. But like his catalog, amid the intensity and punishing weight, there are moments of fragility in this mix that will surprise, but never once disappoint. When DJ Mag remarks that this mix sounds something like a journey into Hell he simply responds...

“Unfortunately, I am not to decide who is going to hell and who is not. It sounds like heaven to me, anyway.”