Ross from Friends: How I Play Live | DJMag.com Skip to main content

Ross from Friends: How I Play Live

Ross from Friends' debut album was released on Brainfeeder Records earlier this year and it's an exploration of the shimmering textures and considered melodies he built his reputation on since his first releases in 2015. He's since taken his live show around the world, combining saxophone and keys with Ableton-led beats and basslines. We spoke to him to find out how the live show works and what bits of kit he'd love to add to their setup.

Why was it important to you to develop a live show over just DJing?
"I was initially frustrated with DJing, I never really knew what music to play, so I thought about different routes to be able to have a performative element to my music. Live performance in electronic music has always interested me. I’d always been in bands and always been pushing to include an electronic influence. So this all led me to put a band together to perform the music."

How did you initially intend your setup to work?
"I knew from the start the members that I wanted to be involved, but I wasn’t sure what roles we were each going to fulfil. We tried out all kinds of different arrangements, one with Jed singing that we quickly got rid of, until one that we all felt comfortable with stuck. John – keys, saxophone – had played in a live electronic act before so he taught me how to use Ableton for performance and let me use his controllers etc. We were poor and confined to the gear that we had laying around so we experimented with the limitations."

How has the setup changed over time?
"The hardware has been pretty much exactly the same since we started. We toyed around with adding an Elektron Machinedrum but we found that it was sort of unnecessary. We also added a Really Nice Compressor on the master channel to act as a limiter which helped give it a lot of punchiness in clubs. The software is where things have changed quite a lot. I’ve been mixing the stems constantly since playing live over the past two years trying to make everything sound clearer. I also mapped a few controls to some drum breaks so I can chop them up live which is a lot of fun." 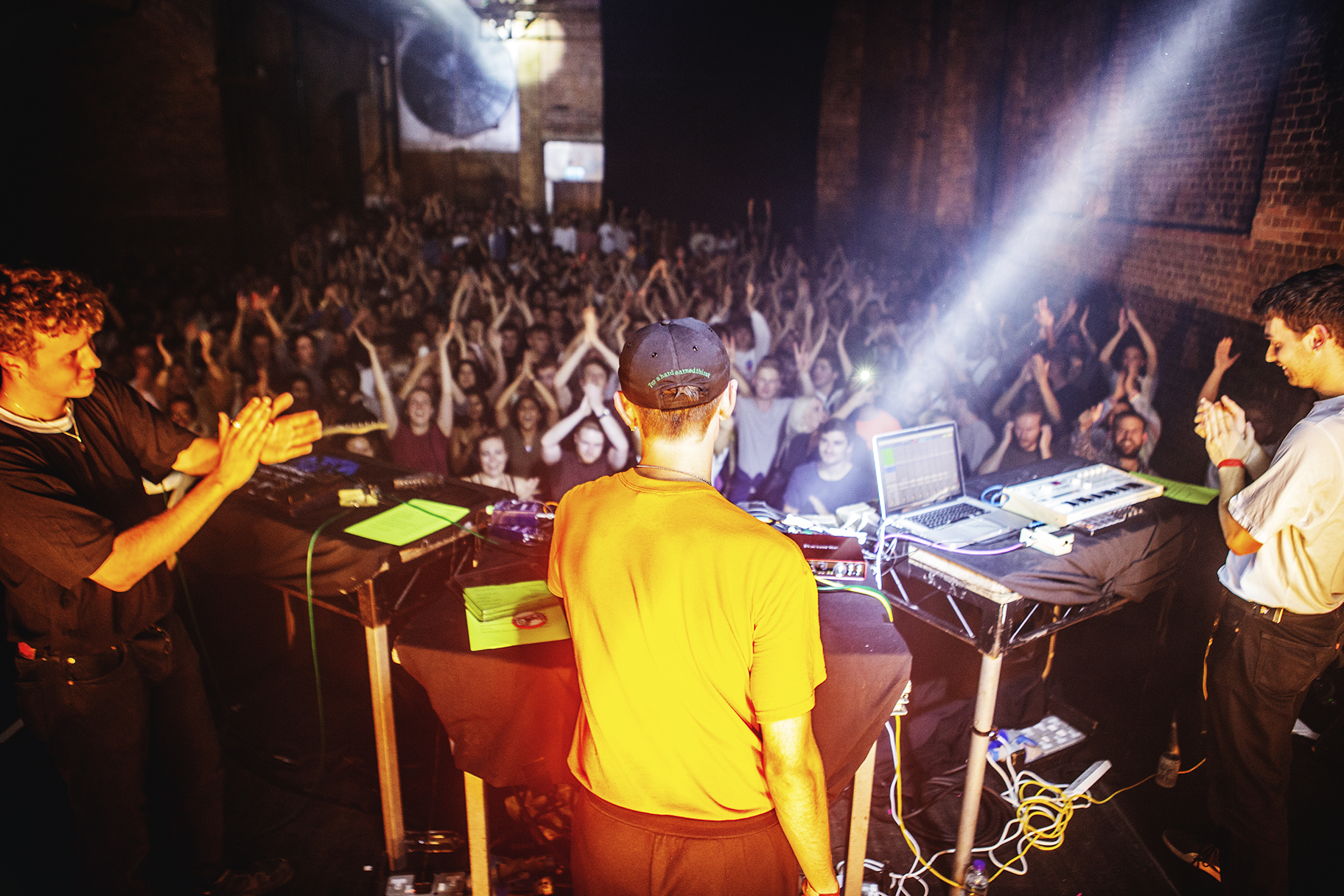 What’s your setup now and how does it work?
"The setup currently consists of me with a laptop, two Novation controllers – one launching clips in Ableton and another with knobs and faders controlling various parameters in the software – John plays saxophone and a microKorg with a delay pedal, which is also hooked up to the software with a strings setting. Jed plays guitar and he has a handful of pedals to generate all kinds of weirdo sound design. Luckily it all fits in three cases and we can fit it into a DJ booth if needs be."

What are the main challenges in the setup as a whole?
"The main challenges usually come down to the software. Because everything is so reliant on the laptop, it can weigh quite heavily on the CPU, so often the laptop completely cuts out. Once we were supporting BICEP at the Invisible Wind Factory, maybe our biggest show to date, and the laptop completely cut out and wouldn’t turn on again. We had to cut the show short and walk off stage. Not good!

"Also, for some reason, we’ve had awful luck with travelling with our gear. There’s been six or seven times in the past year that we’ve arrived at the baggage belt and the airline has lost our luggage. Luckily I always bring USBs with me just in case I have to do an emergency DJ set."

What advice would you give to someone who wants to take their music live?
"My advice would be to try and start with it as portable as possible. It’ll make the whole process much more enjoyable for yourself. Then you can scale it up as you start to understand your boundaries.

"As well as this, try to make something you think is original. That’s as easy as adding a piece of hardware that you know nobody else is using, you can generate a sound that become synonymous with your performance. They’re always the shows that are the most compelling." 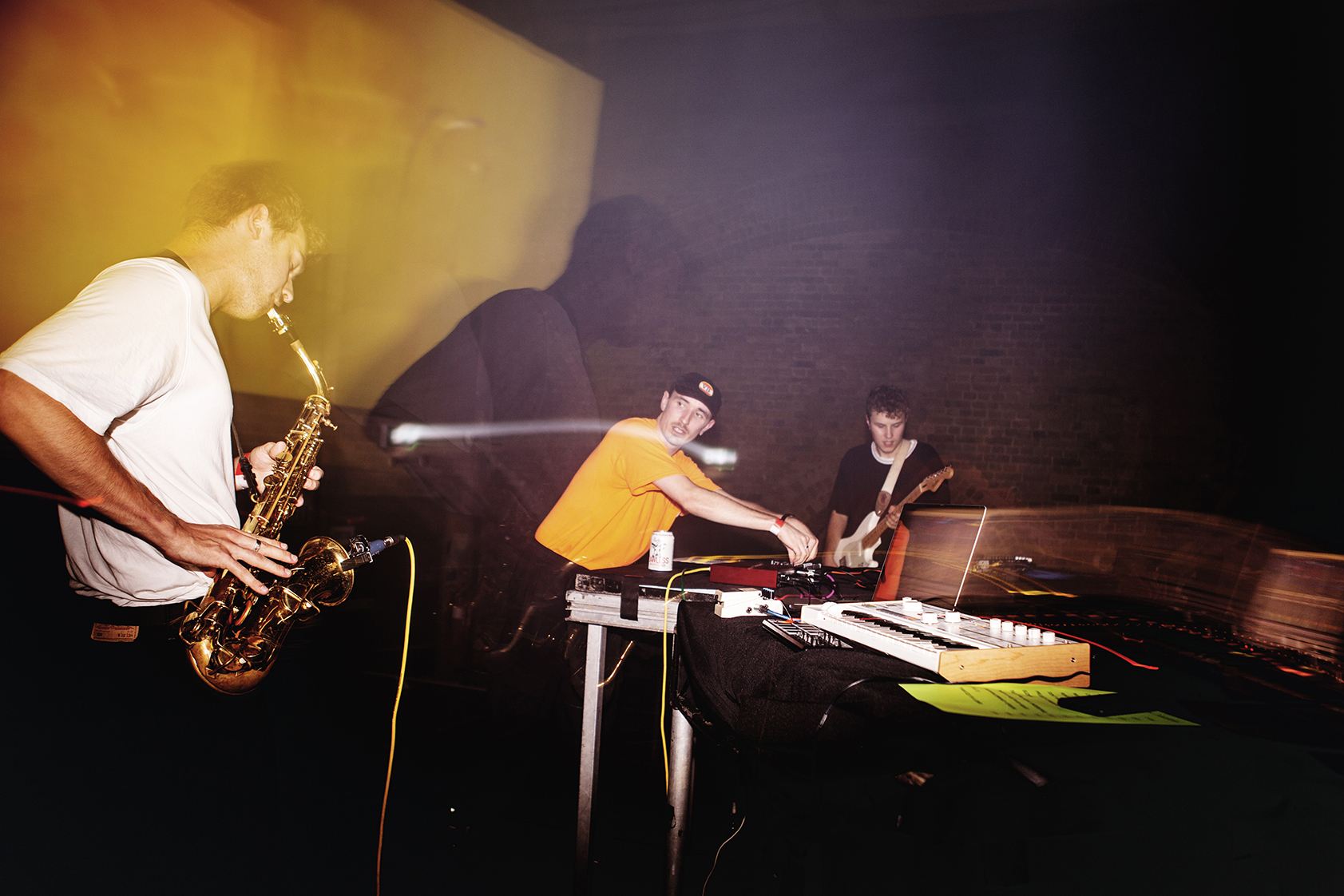 How did you go about adapting what you do in the studio to the stage? How do you decide what’s ‘played’ and what’s not?
"I’d sometimes start with an idea in the studio, a loop or something, and if I’m having trouble extending it into a full track I’d take it to the boys and we’d improvise and play it live a bunch of times until something feels right. That often informs where the recorded version ends up too. A lot of the time we’ve tried playing tracks that I’ve structured but sometimes they don’t work all that well."

What piece of gear would you love to add to your setup and why?
"I think some more hardware like a glitchy drum machine would be cool, but I’d need to dig one out that has a super simple user interface, like a big wheel I could turn to keep it as visceral as possible. Other than that, I’ve always kinda liked the idea of some live cymbals, like a ride cymbal or a big gong. Another great one would be to add dancers, that was my goal when I first started the project. But both a cymbal and a group of dancers are difficult to tour with, so I think I’ll let those areas alone for the time being."

Ross from Friends how I play live

Tech
Watch a min-doc on how Orbital play live