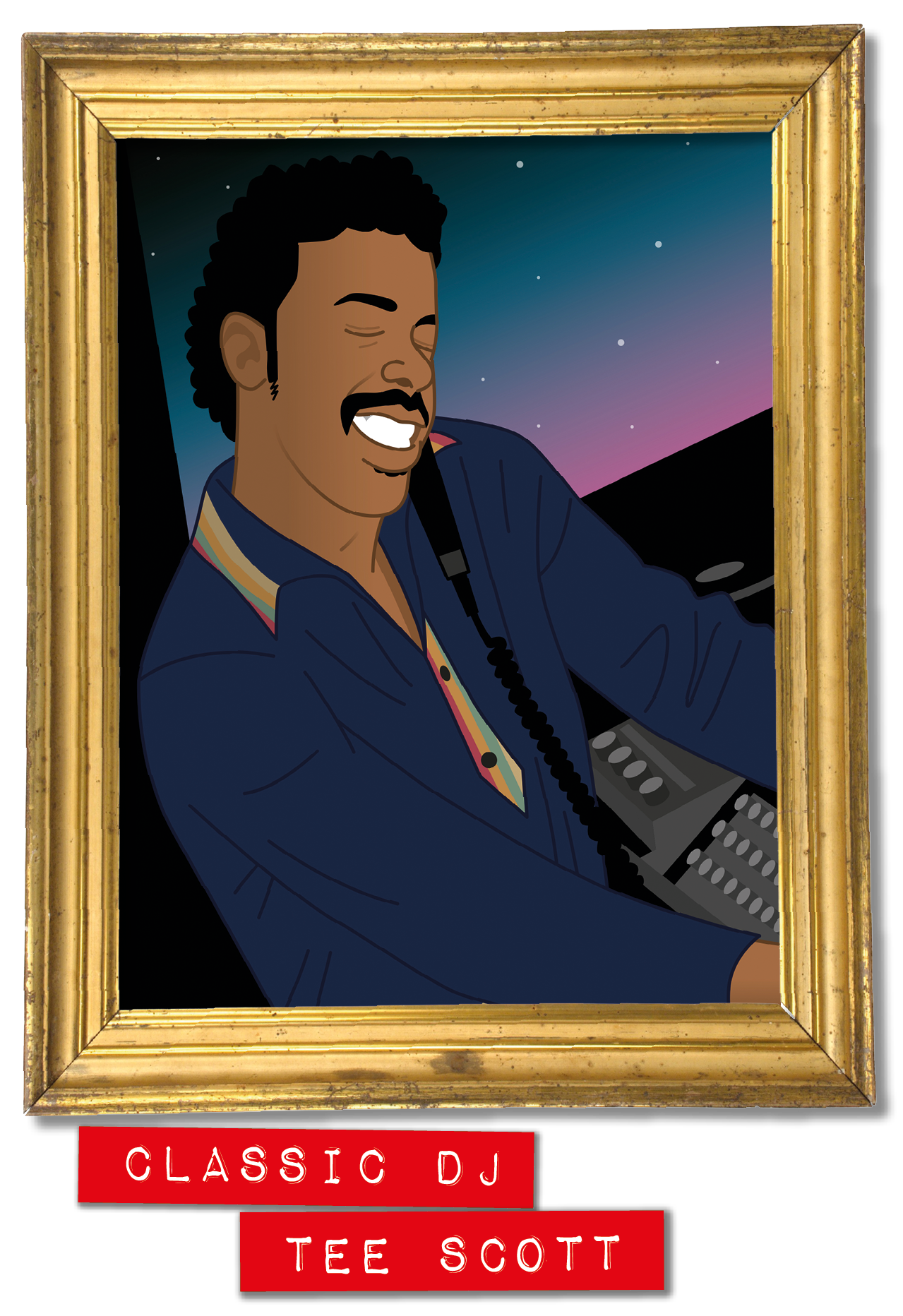 Marc Allen Scott, better known as Toraino or Tee Scott, was a significant DJ in New York during the ‘70s/early-‘80s. He was a remix pioneer and one of the first DJs to utilize 3 turntables and sound effects in nightclubs.

Although he grew up in a musical family, Scott became a DJ by accident, having previously worked as a senior clerk for the Bronx Family Court. He got his first break at Candy Store in 1972, when, on a night out, he criticized one of the DJs working there to the owner, inadvertently resulting in him being offered an audition, which consequently led to a regular slot, playing to a mainly white and Latin audience. Just a few months later he’d secure a night at the venue where he would make his name, Better Days, a poorly lit predominantly black gay club in a notoriously seedy part of midtown Manhattan.

Scott set about establishing Better Days amongst the leading underground clubs in ‘70s New York. Having studied electronics, he designed an amplifier and rigged up the lighting, whilst, influenced by David Mancuso’s Loft parties, he convinced the club to install tweeters and bass reinforcement, plus his Thorens turntables of choice.

He built a reputation for his smooth mixing, acute programming and big, emotional selections. Whilst many view Larry Levan as the greatest NYC DJ, Tee Scott was remembered for being consistently good, with Levan playing more according to his mood. Scott held his position towering above the dance floor at Better Days until late 1980 when another legendary remixer, Bruce Forest, took over, leading the club into a new era.

Following in the footsteps of pioneers Tom Moulton and Walter Gibbons, Scott turned his attention to the studio, landing his first remix for Philadelphia International’s 1979 Edwin Birdsong single ‘Phiss-Phizz’. His break came later that year via his take on First Choice’s ‘Love Thang’, whilst, frustratingly, he wasn’t credited for his mix of Robert Flack and Donnie Hathaway’s 1980 classic ‘Back Together Again’, a top 3 UK hit.

I first noticed the name Tee Scott on the Arthur Baker produced 12” ‘Happy Days’ by Northend, released on Emergency in 1981. What was particularly impressive was that my preferred version, the largely instrumental flip ‘Tee’s Happy’, incorporated the DJs name in its title, highlighting the new-found importance of the remixer.

During the early-‘80’s he’d remix a number of underground club favourites by artists including Sharon Brown, Junior, Stone The Whatnauts and Whodini.

As the decade unfurled Scott’s star faded. He died in 1995 aged 47, having been diagnosed with cancer at the start of the ‘90s. 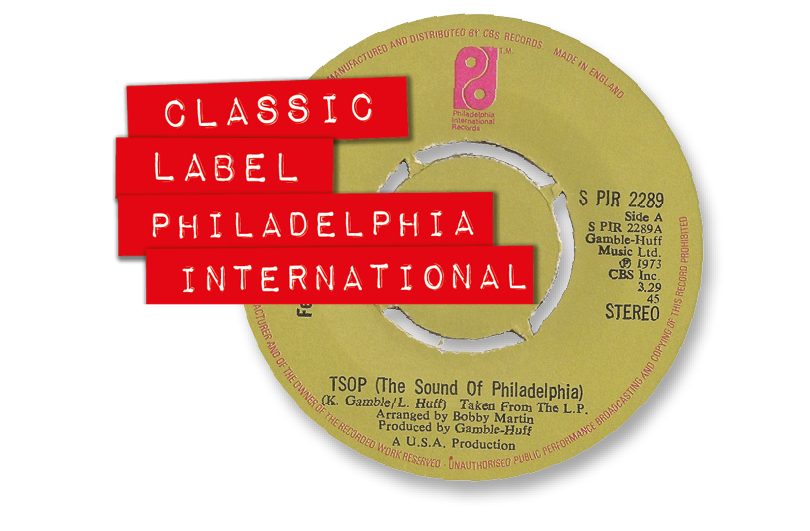 During the 1960s the popularity of discotheques, where recorded rather than live music took precedence, was very much on the rise, with soul labels like Motown (plus subsidiaries), Stax and Atlantic favoured on the dancefloor.

Musicians/songwriters Kenneth Gamble and Leon Huff set-up their own Motown-inspired label, Excel, in the mid-‘60s, soon changing the name to Gamble and making their mark via 1968’s ‘Cowboys To Girls’ by The Intruders, a defining ‘Philly Sound’ release.

They launched Neptune Records in 1969, signing acts including The O’Jays, The Three Degrees and Billy Paul. However, when Chess, the label’s parent company, changed hands, Neptune was a casualty. Gamble and Huff transferred their artists to a new label in 1971, signing an exclusive deal with Columbia Records, who were looking to develop their black music output – this was Philadelphia International, formed in the East Coast’s second largest city, 80 miles from New York.

Gamble and Huff would also set up a publishing company, Mighty Three Music, with songwriter/producer/arranger Thom Bell, best-known for his work with The Delfonics, The Stylisics and The Spinners.

Throughout the next decade Philadelphia International would enjoy major success, achieving over 170 gold and platinum records. Playing a crucial role in evolving the disco genre, it was the leading soul/dance label of the early-mid ‘70s, renowned for its lush string arrangements and particularly influential prior to 1976 when a mutiny of its musicians to New York’s Salsoul Records marked the end of its golden era.

Most recordings were made at Philadelphia’s Sigma Sound Studios, with a collective of over 30 musicians on hand to work with the labels’ artists. Known as MFSB (Mother Father Sister Brother), this intoxicating disco orchestra would adorn some of the greatest dance recordings of the era – apart from the aforementioned O’Jays and Three Degrees, the label could boast Harold Melvin & The Bluenotes, with lead vocalist Teddy Pendergrass tearing it up on memorable tracks like 1974’s ‘The Love I Lost’, and ‘75’s ‘Bad Luck’ and ‘Don’t Leave Me This Way’.

MFSB’s own releases would include 1973’s ‘TSOP (The Sound Of Philadelphia)’ – the theme to the seminal TV show ‘Soul Train’ - and ‘Love Is The Message’, an anthem on New York’s flourishing disco scene. Key members included Earl Young, Ronnie Baker and Norman Harris, the crack rhythm section from Philadelphia group The Trammps – Young acknowledged as the originator of the disco style of rock drumming. Vibes player Vincent Montana Jr. was also crucial, playing on and arranging many tracks.

By the 1980s Philadelphia International’s most successful years were behind it, the Columbia/CBS distribution deal coming to an end in 1985. 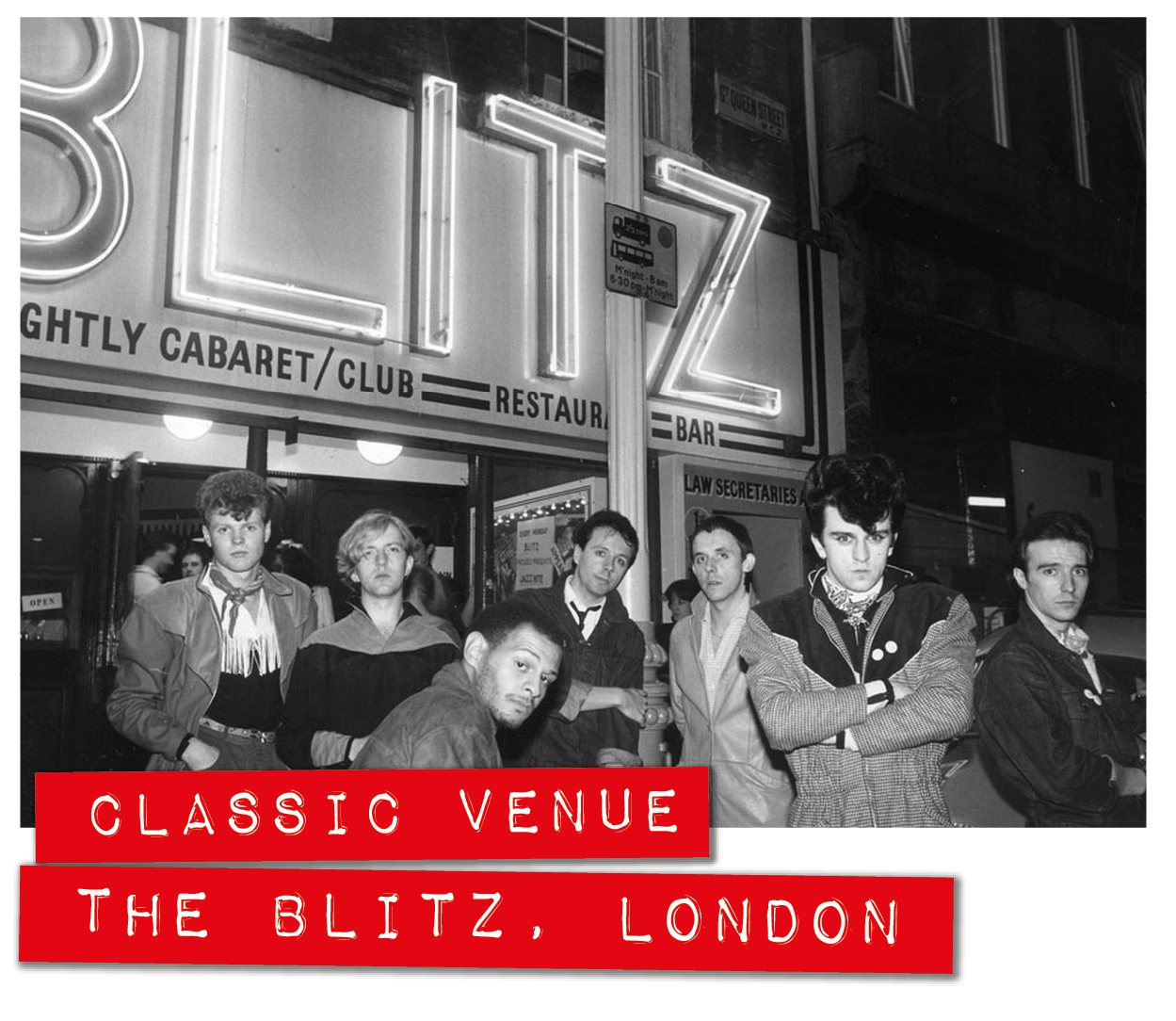 Angry and sometimes nihilistic, the punk scene exploded out of youth culture at a time of great economic turmoil in the mid-‘70s. However as the decade progressed and the situation grew worse, young people in London’s West End decided to reject to squalid, rough-edged punk in lieu of the more opulent and expressive subculture that came to be known as new romantic.

Catalysed in the small Blitz club in Convent Garden, this colourful scene offered up fresh and exciting new ideas and styles, inviting its participants to dress up and be fabulous, donning outlandish costumes and sporting androgynous looks at a time when this was considered provocative to mainstream sensibilities.

Having found themselves entangled in the London punk scene, Rusty Egan, previously the drummer in new wave band Rich Kids, founded by ex-Sex Pistol Glen Matlock and fronted by Midge Ure pre-Ultravox, along with Welsh born provocateur Steven Harrington (aka Steve Strange), had begun hosting ‘Bowie nights’ on Tuesdays at Billy’s nightclub in Soho, where, apart from David Bowie, artists like Lou Reed, Roxy Music and Kraftwerk were heavily featured, and electronic music championed. With Egan soundtracking and Strange hosting, these nights proved hugely popular and after three months the duo moved operations to their permanent home at The Blitz, which was conveniently situated near to St Martin’s art college.

A whole creative culture began to emerge around The Blitz as Egan unleashed a new wave of British club music – evolving an alternative playlist that the new romantic movement that would spread across the country during the early-‘80s.

Egan commanded the decks at The Blitz until 1981, further spreading his musical influence across the city via his King’s Road record shop, The Cage. He became a central figure in the London’s musical development and after his short yet highly influential tenure at The Blitz; he moved to the impressive Camden Palace in 1982, continuing to help push club music in an electronic direction.

A number of bands emerged out of The Blitz including Visage, with Strange on vocals and Egan on drums, Spandau Ballet who had a number of their early gigs at the club and Boy George’s Culture Club. The club’s regulars were known as Blitz Kids and also included The Face journalist and BBC Radio London DJ Robert Elms, singer-songwriter Sade, as well as Chris Sullivan who’d continue to keep the new romantic flame alight in London as co-owner of the ultra-hip Wag Club, formerly Whiskey A Go-Go.

Steve Strange and 3 fellow Blitz Kids famously appeared alongside David Bowie in the video to his 1980 #1, ‘Ashes To Ashes’. 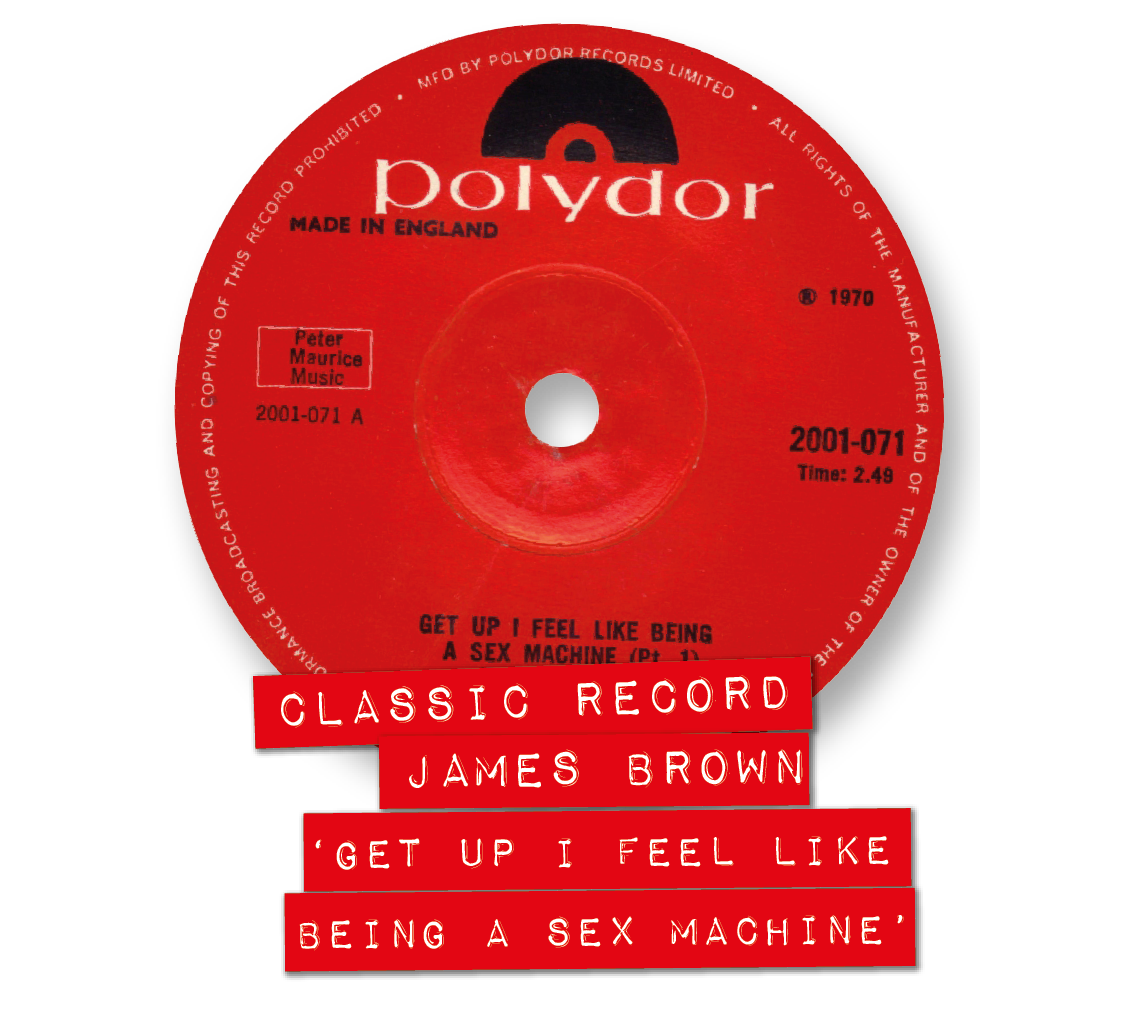 Although it was with ‘Cold Sweat’ that James Brown first unleashed funk upon the world, it was in 1970, with ‘Get Up (I Feel Like Being A) Sex Machine’, that ‘soul music’s bastard offspring’ arrived in its fully realised form.

‘The hardest working man in show business’ had been around since the early-‘50s, first emerging in Georgia as part of the Gospel Starlighters alongside friend Bobby Byrd. The band became The Famous Flames and got their break after coming into contact with Brown’s idol, Little Richard who put them onto his manager and gifted them the title of their first R&B hit, ‘Please, Please, Please’ (1956), which he’d scrawled onto a napkin.

His next major hit, ‘Try Me’, came in 1959, hitting the top spot on the R&B chart, but it was 1963’s ‘Live At The Apollot’ LP that launched James Brown to a wider audience, reaching #2 on the US album chart and illuminating Brown as one of great live performers in the process.

The next watershed release, 1965's ‘Papa’s Got A Brand New Bag’, was not only his first US top 10 single, but his first British hit – breaking through after initial support from the Mods - whilst ‘I Got You (I Feel Good)’ and his epic ‘It’s A Man’s Man’s Man’s World’ (1966), confirmed his place at black music’s vanguard.

Although dubbed ‘Godfather Of Soul’, funk was destined to become the musical style most associated with James Brown - ‘Cold Sweat’ laying its 1967 blueprint, with further tracks including ‘I Got The Feeling’, ‘Say It Loud – I’m Black And I’m Proud’, ‘Give It Up Or Turnit A Loose’ and ‘Mother Popcorn’, further endorsing this new groove direction during the decade’s final years.

Having dismissed most of his band at the onset of the ‘70s, Brown began working with a group of younger musicians he’d name The J.B.’s. One of their first recordings was ‘Get Up I Feel Like Being A Sex Machine’, driven by the killer bass of a brilliant raw teenager called William ‘Bootsy’ Collins, who, despite his inexperience, had been, in a bold stroke of genius, brought to the fore by Brown.

Accentuated by his vocal to-and-fro with long-time collaborator Bobby Byrd, ‘Sex Machine’ is a triumph of rhythm - forever vital and urgent.