Heading along the winding countryside roads of Abbots Ripton, after stocking up on Strongbow at the nearby Tesco, Gardeners like ourselves meet playful signs... 'Imagination Station, Actual Facts Not Welcome' and 'Mental Gym Next Left, Exercise Your Demons'.

And imagination is what Secret Garden Party encourages most. All it takes is one walk around the festival site and a few glances at the fancy dress choices — whoopee cushions, blow up bananas, Crayola crayons and a family of Smurfs, among countless others — to lose yourself in a world of childish silliness (this year's theme).

You'd be hard pressed to find a more colourful and imaginative festival: glistening 'Disco pineapples', multi coloured jellyfish made from neon feathers and string, decorated didgeridoos hanging from trees and real life taps flooding water into the Great Lake... There's also the Lake Stage which requires a boat/dingy ride to get to; oh, and it's made out of Lego bricks. 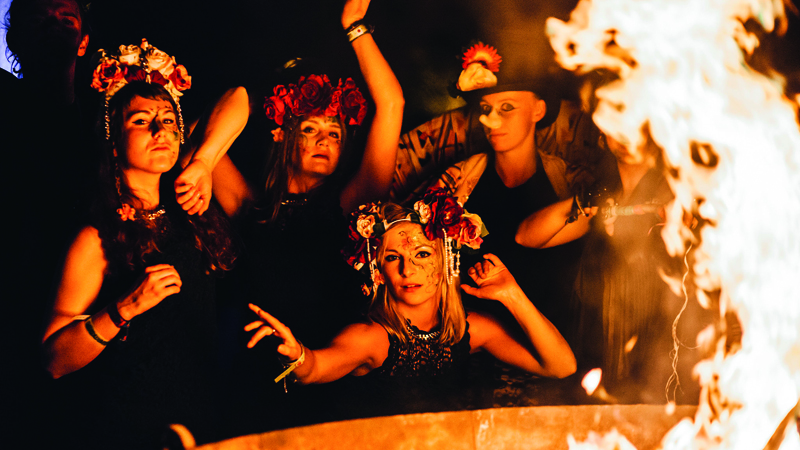 With further exploration, there's a whole host of other creations to make you think WTF: a giant magical snail called Shaboo with springy eyes; Le Freak — a vertical explosion of colour which stands tall only when someone rides its bike — and oversized robots doubling up as industrial-sized speakers at The Dance Off, a stage with a wrestling ring for its dancefloor, a bright pink bouncy castle and ball pit; there's also an oversized Fantastic Mr Fox with its mouth wide open and a gunge room to take us back to the days of Dave Benson Phillips' 'Get Your Own Back' — the activities for adults pretending to be children are endless.

One of this year's newest and best additions was the Little Horrors tent. Hosted by Maya Jane Coles, who, returning after last year's triumphant set, invited some of her "weird and wonderful friends" along to the Party and performed for the first time under her Nocturnal Sunshine alias.

The red Big Top style tent, chock-a-block from Citizenn & Ejeca's joint set on the opening evening right to Catz & Dogz's who closed the tent on Sunday evening, has revellers eagerly edging in from the rain and mud.

In fairness, it's not often you find the likes of Maya, Kim Ann Foxman, B. Traits, Huxley, George Fitzgerald, Daniel Avery and Waze & Odyssey ALL performing in the Cambridgeshire countryside, let alone on the same weekend, so it's no surprise how over-subscribed Little Horrors turned out to be.

Aside from the world class DJ talent on tap, live theatrical performers give the crowd something truly thrilling. Throughout Hot Since 82's deep house set, a scary looking bare-chested man with face-paint like The Joker is caught sticking latex over his nipples before juggling — and swallowing — fire batons.

Returning for its fourth year — 'bigger, bolder and more bass-heavy than ever before' — The Drop, which rests on the base of steep slope next to the Great Lake on one of Secret Garden Party's many hills, is constantly rammed 2pm to 6am. 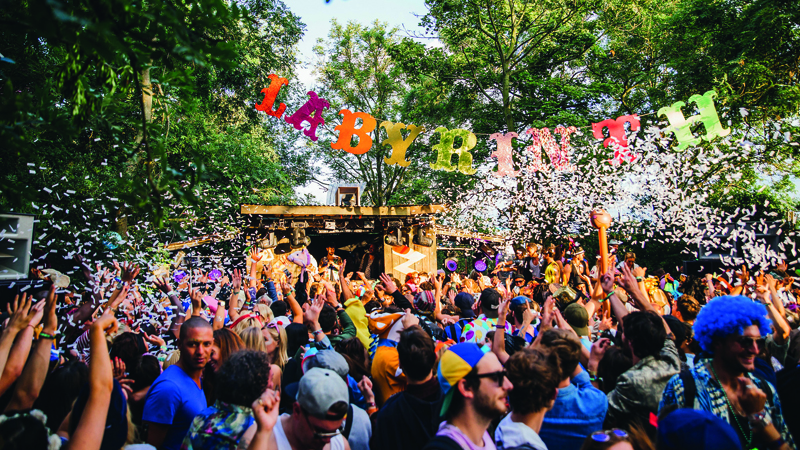 Boasting the biggest names in house, techno, electronica and everything in between, the mirrored stage full of trippy colours welcomes everyone from The Martinez Brothers who deliver rolling tech house to a typically eclectic b2b2b2b from Jackmaster, Joy Orbison and Ben UFO while J.E.SuS — comprising of Jackmaster, Eats Everything, Skream and Sasha (the latter filling in for Seth Troxler), close the festival in style.

"I don't get it," mutters a guy dressed in tie dye prints and baggy harem trousers. DJ Mag ponders whether we do either. But, surely, that's the whole point.

Secret Garden Party isn't meant to make sense or be understood. It's a place which allows unparalleled freedom and fun (if only for a long weekend) away from the humdrum of every day — you can build sandcastles on the beach, get married, have a birthday party, roast marshmallows by the campfire, watch Mickey Mouse on the big screen, play human Buckaroo, relax in a hammock made from cellophane and even meet the cast of Games of Thrones.

That's why this festival's grown from a 1,000 person event to the in-demand Secret it is today!