When the pandemic hit, Hyperdub-signed Canadian musician and vocalist Jessy Lanza packed up and moved to the sunny West Coast, where she began a busy period of recording and releasing new music. With the release of her edition of !K7 Records’ ‘DJ-Kicks’ mix series, and a new tour with Caribou ready to roll, DJ Mag caught up with Lanza about her latest works and collaborations, and her eternal love for R&B

On a sunny, autumnal afternoon, sitting on a bench in San Francisco’s Golden Gate Park, producer and vocalist Jessy Lanza is running down the history of Canadian R&B, BDE style (Before the Drake Era). Her timeline of unsung hitmakers includes Bass Is Base, Liberty Silver, Deborah Cox and Tamia.

“Tamia was a big influence for me, I loved her,” Lanza says of the sultry Quincy Jones collaborator and ‘Missing You’ singer, who was born not too far from Lanza’s hometown of Hamilton, Ontario. Talk turns to the reasons why Canadian soul singers not named Celine Dion had such difficulty breaking through back then, including the Canadian government’s refusal to grant an “urban” radio station license until 2001.

“We had to rely on American radio to hear the latest R&B. There was basically a wall around Hamilton, where only classic rock came through — Kim Mitchell’s ‘Lemon Wedge’, that sort of thing,” Lanza remembers. “It was so depressing! I would just be so stoked when we were driving toward Niagara Falls, and WBLK from Buffalo, New York, would start coming through. That’s when we’d hear Missy Elliott and Timbaland, Aaliyah and Ginuwine. Eventually Drake and The Weeknd came along and things really exploded for us, but most of what I make still revolves around that excitement of the golden age of R&B.”

Lanza’s work, a longtime collaboration with Jeremy Greenspan of moody electronic duo Junior Boys, sparkles with the breezy melodies, gleaming curves and futuristic production of that golden age, while also incorporating footwork, house, techno and an unabashed adoration of pop. “I love pop’s accessibility and playfulness,” she says. “I crave the direct connection that a hook and a voice bring to a DJ set or dance track. I think that’s why singing through a mix is important for me.”

Lanza’s gossamer, often sexually forthright vocals — full of gentle come-ons, stony kiss-offs, coos, swoops, sighs and sensual chatter — are the connective tissue on her entry to !K7 Records’ long-running ‘DJ-Kicks’ mix series, which was released in November. She’s gathered various tracks from four decades into “something that sounded like me, something that connected the dots on what I’ve been doing; full of melody and that sweet and bleary 4am feeling, when you can’t leave the dancefloor.”

The mix glides through DJ Spookie’s sproinging techno, leftfield ’80s synthpop from The Raining Heart, TAH’s pummeling Jersey Club, and a trippy ode to smoking trees by Lolina — with enough new material from Lanza to count as an independent release, including the footwork-nodding ‘Seven 55’, a collaboration with producer Loraine James. (The album version comes with its own “lube sachet”.)

Throughout the mix, Lanza sprinkles in acappella moments and random vocalisations. Her vocal style is more laidback than melismatic; despite the R&B roots, she’s more prone to wandering about than scaling an octave or two. Her music claims space for her voice to just carry on as it likes, with listeners floating weightlessly through a riveting internal conversation. If an early dance music stereotype was that women were either demanding divas or orgasmic angels, Lanza bends those tropes in a different direction: it’s an abstracted romance, conveyed in fleeting feelings, playfully nonsensical lyrics and buzzy ideas.

“It’s funny how I don’t particularly like singing, but I feel that it’s all I’ve got,” Lanza says, downplaying her talents. “With ‘DJ-Kicks’, I kept coming back to how important it was that I sang through the continuous mix. I wanted to make it unique, and I was thinking the only way I could do that is if I sang. I haven’t been DJing long enough to feel that I have too many tricks up my sleeve.” Lanza even shouts out Hamilton on the mix by including a sample of oldies radio station CKOC’s final call sign announcement —  “I rushed to record it, as they were going off the air forever” — and a minimal techno track by Ollie Barkovic, aka Secret Werewolf.

The ‘DJ-Kicks’ mix caps a prolific stretch for Lanza, despite the pandemic. In July 2020, she released her third album ‘All The Time’, the follow-up to 2016’s Polaris Prize-nominated ‘Oh No’ and her 2013 debut ‘Pull My Hair Back’; all were released on the Hyperdub label. Last December, Lanza put out the ‘24/7’ mixtape, an ‘All The Time’ remix album bristling with up-and-coming producers that have made Lanza “feel connected to the world” in pandemic times, like Foodman, DJ Swisha, Kate NV and Loraine James. In recent months, she’s been preparing to hit the road opening for Caribou, with whom she toured in 2014.

Throughout, Lanza has produced a series of charming DJ streams that show off her vocals and rapidly developing production chops in intimate situations — lounging on her bed, camped out on her couch with a bottle of wine, and languidly perched inside and atop her 2010 Toyota Sienna, pictured on the ‘All the Time’ album cover. (Her 2020 Boiler Room set dramatically, hilariously started with its hatchback opening in a cloud of fog, to reveal Lanza casually crouched over the CDJs inside.)

The Sienna played a crucial non-musical role in 2020 as well. After living in New York for three years, she and her husband, videographer Winston H. Case, had just given up their apartment in preparation to go on tour. Then Covid-19 hit: Lanza found herself in Europe when US travel restrictions were announced, and had no home to return to. “I remember right when Trump made that tweet about the border closing in March 2020, and the panic hitting. It was a mad scramble to get back here. Then once we arrived, we looked at each other like, ‘Now what?’”

The couple packed what they could and drove across the country to Case’s parents’ house in Woodside, California, about 30 miles from San Francisco. Lanza was immediately taken by the natural setting — “everything in California is just better,” she says wistfully — and found herself in the thick of it.

“My studio is now set up in a treehouse that was built for my husband’s eight-year-old brother,” Lanza says, laughing. “I’ve got my Moog Mother 32 and my DFAM up there with the card games and flashlights.”

Lanza’s musical career was a family affair from the beginning. Once a thriving steel industrial port, Hamilton was racked with the same economic woes as US Rust Belt cities like Detroit and Chicago, without the élan of a fervently developing electronic scene. But it did have a tight-knit underground community. “My cool cousin had a Plastikman tattoo and threw raves, but kept me at arm’s length because I was too young to go out,” Lanza says. “My musician dad had a side business renting out PAs to parties, so I was aware of what was going on. Mostly, I just threw myself into my own music studies.”

A piano player, Lanza attended Concordia University in Montreal and then McMaster back in Hamilton. She studied jazz, which turned her on to experimental and improvisational forms, as well as Soulquarian artists Erykah Badu, Jill Scott and Talib Kweli. One of the first electronic tracks that she remembers making an impact was Ian Pooley’s 2001 collaboration with Canadian trip-hop diva Esthero, ‘Balmes (A Better Life)’, which was a staple of Ontario radio. But mostly she still gravitated towards R&B — which, in the mid-’00s, meant pop.

“By the time I could really go out, it was the age of $2 jello shooters and Top 40 in the clubs,” Lanza remembers, “which was fun, but there was definitely a grim Girls Gone Wild thing from those years that I’ve thankfully blocked out of my memories. Watching the Woodstock ’99 documentary recently really brought some of what was happening around me back then into focus. I loved pop, but I couldn’t fully sign on to the culture from that time.”

While she was exploring new musical avenues, Hamilton’s web of family connections kicked in again: Lanza’s best friend’s brother was Matt Didemus, one half of Junior Boys. After she was asked to sing on a Junior Boys track, she started hanging out with other Junior Boy Jeremy Greenspan and making music. Greenspan’s sister was good friends with Steve Goodman, aka Kode9 of Hyperdub, who would come stay when he had gigs in Toronto.

“Meeting Kode9 really opened up a whole world to me that I just wasn’t very aware of,” Lanza says. “Steve was always so encouraging to me about DJing, and through him I learned about DJ Rashad and footwork. That tied a lot of things together for me, like how to sample jazz music and make it sound like something intricate and not goofy.

“For a couple of years the music Jeremy and I made together was pretty bad,” Lanza admits. “Everything finally clicked on ‘Kathy Lee’” — a footwork-influenced track built around a sample of someone saying “cat daddy” on YouTube. “We showed it to Steve, just for fun, and he immediately wanted to put it out.” Lanza and Greenspan’s working relationship hit a groove: they each work in separate studios now, and send things back and forth, which enhances Lanza’s intricate, collage-like process of composing, which belies her music’s effortless sound.

“Jeremy’s very good at shaping and finishing things,” she says. “Most of my process is building things up through hours of cutting and editing and scrubbing through things I’ve done years earlier. There’s always something to do at my computer; looking for something I’ve recorded that catches my interest. 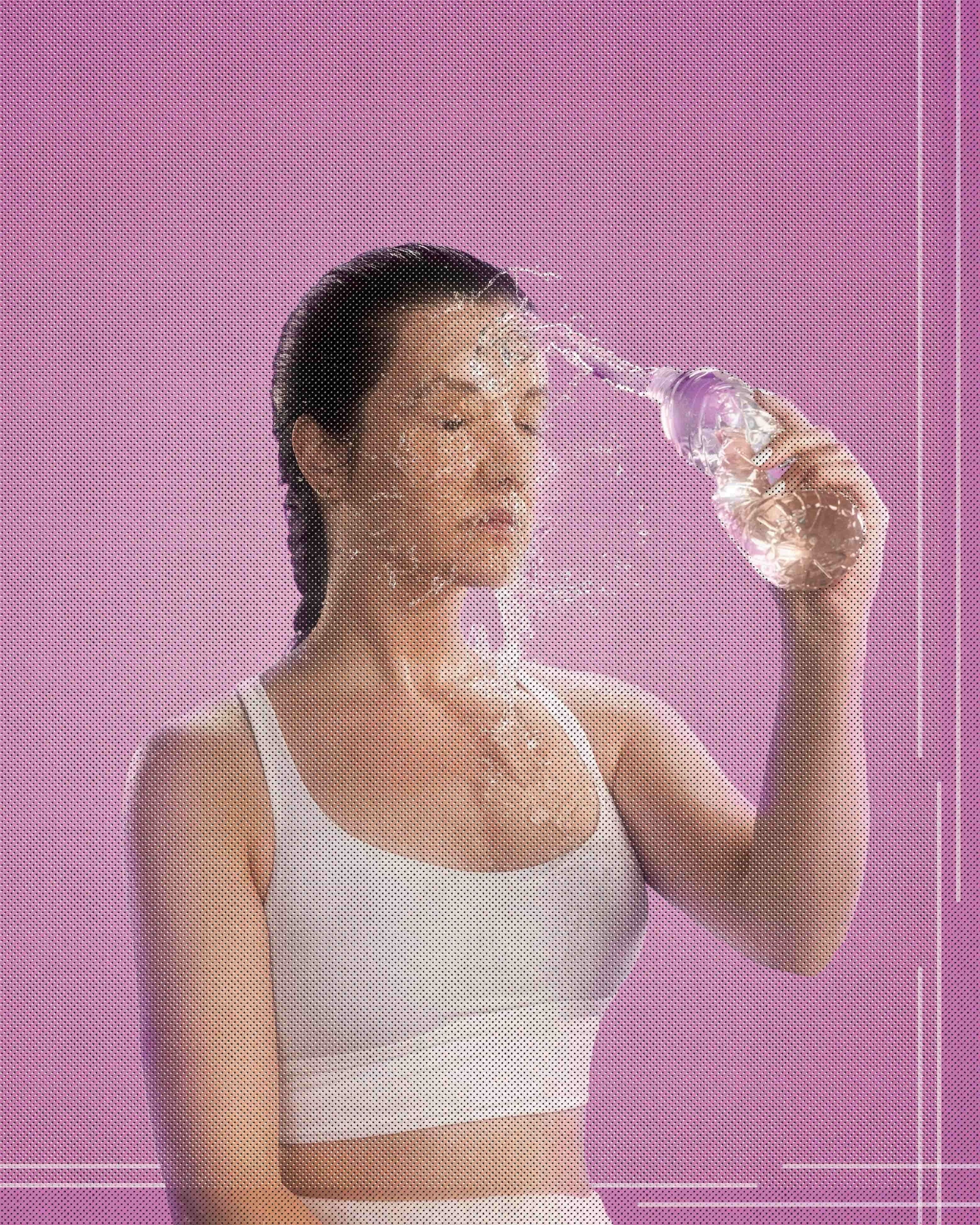 “What ends up coming through are these tiny little moments that have survived hours of recording, processing, layering and rediscovering. I’m also not a very organised person when it comes to file management, so that complicates things a bit. But I’m getting better,” Lanza adds with a self-aware laugh.

‘All The Time’ was explicitly a more R&B album than the previous two. “We really wanted to focus on the vocals — on the classic harmonies and backing vocals you hear in great R&B, but also the clarity. We wanted shit to really punch through. Jeremy just built a new studio from the ground up, so you can hear every little hiss from the humidifier or whatever now when I send him my vocals. I recorded in Morgan Geist’s studio in New York after I moved there from Hamilton to live with Winston. I think we had hundreds of vocal takes.”

Looking forward, she hopes to inspire people, especially young women, to try their hand at electronic music. “That’s the dream. If I can be encouraging to someone, then I feel that there’s a real reason I’m doing this, other than making myself happy. There’s definitely an initial hump to get over to learn the basics of production, but once you do, it’s honestly so much fun.”

News
Cooly G returns to Hyperdub with new EP, ‘Save Me': Listen