Dedicated to both unearthing lost gems and supporting new talent, record store and label Rush Hour has become a crucial part of dance music culture not only in its home city of Amsterdam, but across the world, fuelling a modern scene that eschews boundaries set by genre or generation. DJ Mag meets co-founder Antal in-store to discuss the label’s history and the open-minded, crate-digging ethos that’s made it such a success...

It’s the mid-90s and a teenage Antal Heitlager is on an overnight bus to London. When he arrives in the UK capital he plans to spend the day shopping at record stores like Fat Cat, Atlas and Reckless Records before, unable to afford accomodation in the city, returning to Amsterdam overnight that same evening with a fistful of vinyl.

“Almost everything is at your disposal nowadays,” Heitlager — better known by his stage name, Antal — tells DJ Mag over 20 years later. “Sometimes it’s a bit too easy. 15 years ago it was a drive. Almost a reason to live.” Already an avid record collector and private seller by the time he started university, as a student Antal would go on to meet Christiaan Macdonald; the pair bought a stockpile of house records from Coco Records in Zaandam before starting a mail order store from their student house — long before the age of Discogs — giving birth to the now legendary label and record store, Rush Hour.

“I was interested in getting my hands on more records, and after visiting shops like Fat Cat and Atlas I felt like setting up a store myself,” Antal enthuses about the early years of Rush Hour. “There was never a business plan. The most we plotted out was a small list of necessities for the opening. After that it was just enjoyment and living and running a store on a daily basis.”

Formed on a love of house and techno stemming from Chicago and Detroit, Rush Hour started out as a physical shop in the basement of a hairdressers in 1997 before moving to its former location on Amsterdam’s Spuistraat, becoming known for importing rare records from across the world alongside pushing a large dose of homegrown talent in the Netherlands.

“The most vital part has always been the music selection,” Antal continues. “When we started, musical areas were quite segregated in Amsterdam. You were house or hip-hop or trip-hop or funk or drum & bass. There were people who enjoyed different things but in clubs it wasn’t really mixed up. Nowadays that’s more accessible and accepted. “[As Rush Hour] we have always been all over the place. Something that might not be easy to pin down. When we opened the store we tried to make combinations with different types of sounds. I remember we were struggling what to call that because we were only just finding out ourselves. One of my friends once stated it as, ‘Someone can always find a little something in Rush Hour that he or she might like’. It’s just what comes on our path, but we have to be into it.”

DJ Mag first meets Antal during last year’s Amsterdam Dance Event, at the new Rush Hour store, just up the Spuistraat in the larger space it moved to in 2016. At the time, Lost Souls Of Saturn — the duo made up of Seth Troxler and Phil Moffa — are playing a live in-store during the week-long celebration of electronic music in the city. The currently packed-out Rush Hour store Antal looks across is now a simple yet impeccably designed space, with maple flooring and racking, white walls and a minimalist décor except for the vinyl it sells. Unique for many modern record stores, it has more space dedicated to open areas where diggers can meet and spend time in a creative hub for music. It’s something that is typical of Rush Hour, who not only survived the mid-noughties vinyl downturn but flourished by adopting the 360-degree approach that’s fundamental to success for an independent business in electronic music now.

Through the years, Rush Hour has diversified from being a record store into an international distributor for a plethora of labels, including Music From Memory, Soundway Records and Jheri Tracks, a central label under its own name, and numerous sub-labels through the years. Alongside these are events that have seen Rush Hour host parties in Amsterdam, Paris, Berlin — with Antal having a long-running affinity with Panorama Bar — Barcelona, London and further afield. The company also annually produces its own in-house magazine, House Of Music, which is distributed to an international network of record stores, whilst the space behind the shop now acts as the brand’s operational headquarters.

“We had this approach as early as 1998,” Antal explains. “This is how we started. We outlived almost every record store in Amsterdam. We always worked on those extras within our company that made it interesting for labels and artists to work with us. Moving away from being a traditional import record shop. All without a business plan, though,” he smiles. “We just realised along the way that this is something we should do and step-by-step it grew from one crate of records to the full company it is now. Maybe nowadays we have a bit more of a business-minded [approach, but that] is irreversible as it became a company with about 20 people on the payroll.” 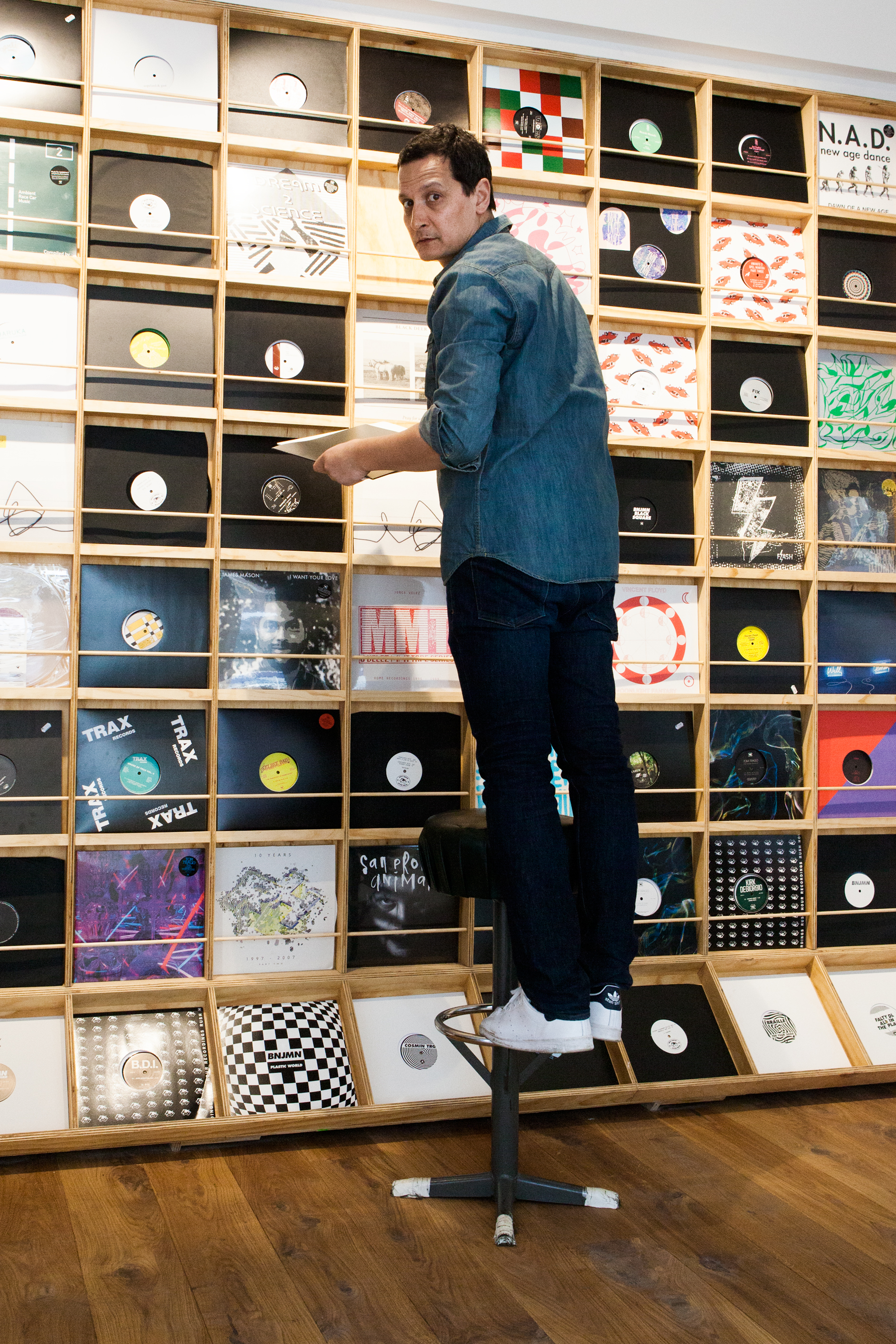 Rush Hour’s longevity musically, though, is largely due to its refusal to be pigeonholed under a specific sound or style. The music they purvey is singularly undefinable, growing from their love of Detroit techno and Chicago house to also encompass a discerning selection of electro, jazz, Afrocentric sounds, funk, soul, Eurocentric techno and way beyond. Through the years the brand has not only become a stamp of impeccable taste, but also a one-stop shop for records and releases that originally flew under the radar of international recognition.

Having recently stripped their label output back to two imprints, Rush Hour and New Dawn, the brand is as known for reissuing hard-to-find records and unearthing obscure tracks from the past and turning them into dancefloor hits as it is for releasing new music. They’ve also released local heroes as well as seminal artists from a huge variety of the world’s music scenes, with success stories including material from Les Choc Stars Du Zaire, Senyaka, Ryuichi Sakamoto, Sumy, Ron Trent and James Mason. One of their most revered releases of recent years is the ‘Sounds From The Far East’ compilation, which played a huge part in launching the renaissance in Soichi Terada’s career.

“The difficult projects are typically interesting because it shows you that as a company we can do something where others might not have dared to start,” Antal explains. “The one with Soichi was fun and very rewarding as it became so successful for the artist. That is the biggest reward.”

But Antal is keen to stress that through Rush Hour’s 20-year history, nothing has been done for attention or recognition, but instead a love of the music that surrounds its multifaceted output. It’s this that has lead to the tight-knit family of artists that now surrounds the label and have also become international names in electronic music in their own right. These include the likes of Hunee, Young Marco, Interstellar Funk and many more, whilst San Proper’s connection to Rush Hour runs so deep that he bears a tattoo of the brand’s logo on his left bicep. Co-founder Macdonald parted ways with Rush Hour in 2013, and now runs artist management agency Society Fools, who look after Dutch artists including Young Marco, Tom Trago and Gaussian Curve.

Rush Hour’s most-anticipated release so far of this year was a repress of Klein & MBO’s ‘80s Italo classic, ‘The MBO Theme’, which landed in February with a super-rare South African version on the flip — recorded during a time that foreign culture was banned there — which Antal found on a record shopping trip in South Africa. He sent diggers into a frenzy after playing it during his Dekmantel Boiler Room set in 2016. 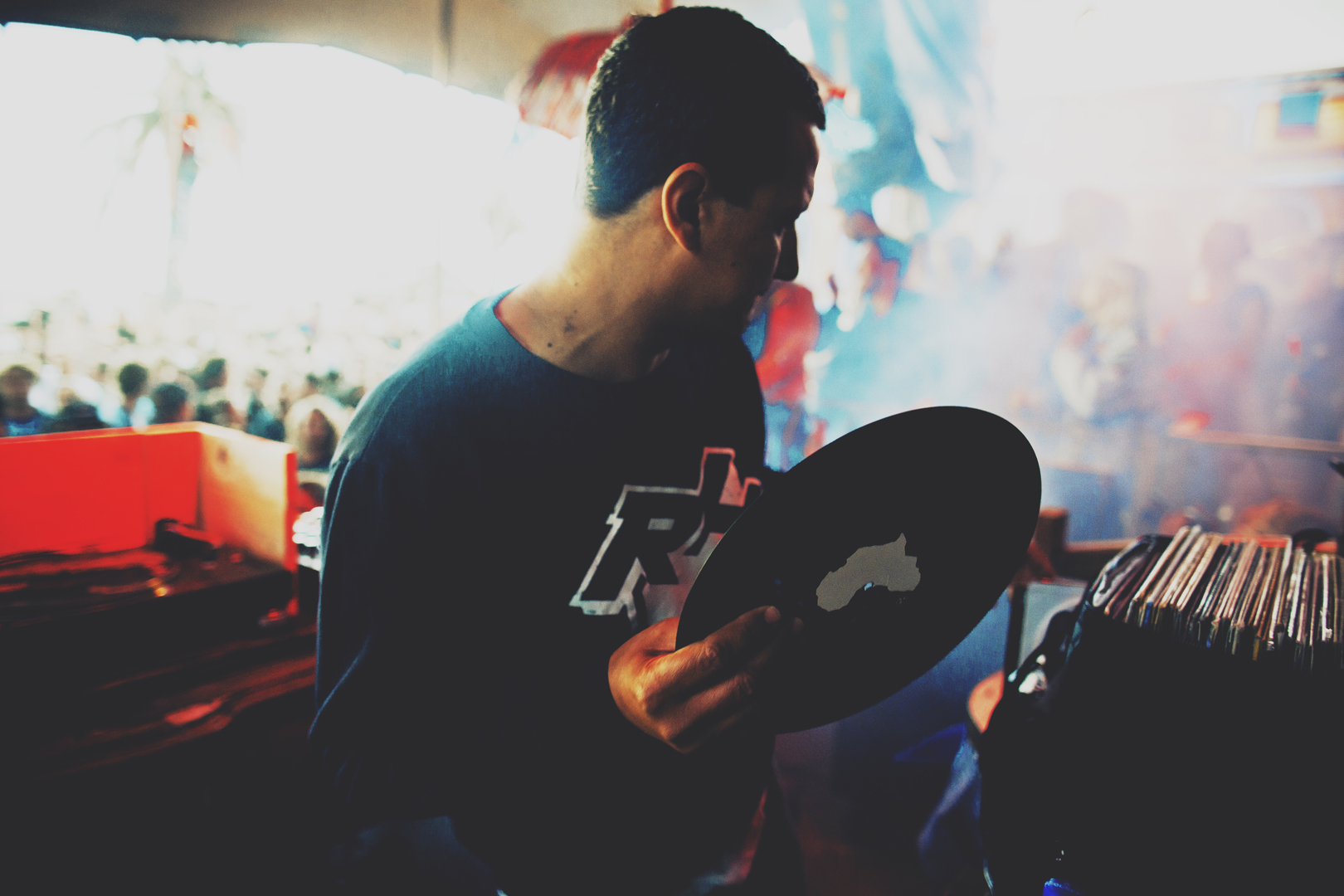 The Rush Hour co-founder also enjoys a busy career as a touring DJ alongside his work for the brand, as well as being a family man with two daughters. “I am still finding out and fine-tuning all the time how to make it work,” he says of his work/life balance. “Often it means little hours of sleep but for now it is good.”

Antal carries his approach at Rush Hour into his style as a DJ, with the brand’s ability to present music from all over the world in a coherent manner forming the backbone of his sets. In fact, trying to seperate the man from the brand is often difficult. “I can’t do one without the other,” he agrees. “First I was a DJ, and then I started Rush Hour because I wanted more records. Now my DJing is interesting because of the Rush Hour story. I bring ideas from the dancefloor to the company, and every single day I work at Rush Hour I end up with new tunes to play. Trying to find music I like and love has been the basis of it, though. Personally, for instance, I can be into Brazilian music for a moment but then next into synth-pop or techno. I often describe music geographically. But should it be described? It’s just good music, I guess.”

In that sense, Rush Hour has become the sound du jour in the latter part of this decade, as everyone else has caught up with their ability to weave seemingly disparate sounds together in a coherent manner. “It’s not about one thing,” he counters. “I see it more that a lot of young people got into so much good music. People switch between songs and sounds real fast. They’ve been branding it a selector now, and maybe that explains it a bit, but it’s a very old term within DJ culture. In that sense it’s nothing new for deep music lovers, but it’s great that the platform became so much bigger nowadays.”

Rush Hour also opened during a very different time for electronic music in Amsterdam, with the brand now part of a flourishing scene with a supportive network of clubs, collectives, labels, artists and promoters, including international names like Dekmantel, De School, Red Light Radio and ADE. Across the world dancefloors are also becoming more open to the combinations of music not usually heard in bigger rooms, thanks, in part at least, to Rush Hour. “This is because more and more entities started pushing in that direction,” Antal smiles. “I do remember clearing dancefloors with these sounds that are now in fashion.”

But even with the wealth of record shops in Amsterdam now, Rush Hour regularly stands out above the rest. And as one of the biggest success stories in independent electronic music, Antal says that he hopes the brand can serve as an inspiration for the DIY scene. “I am proud of the fact we never had a loan, or a rich uncle or external company that injected a large amount of cash,” he concludes. “Our company grew from our own energy and passion. Every time we invested our own money back in. And still today every investment is made from within. So a big thank you has to go out to all the loyal customers who buy records with us on a regular basis.”

As Young Marco once said, “Every city needs its own Rush Hour.”

News
New electronic music museum, Our House, to open in Amsterdam this month