THE BLACK MADONNA AND UGANDA'S DJ RACHAEL ARE EQUALIZING MUSIC

Chicago’s dancefloors are second to none. One glimpse of the pulsing crowd that packs Smart Bar, the legendary no-frills club two blocks north of Wrigley Field, is enough to confirm that statement on any given night. But tonight, the vibe is palpable before even setting foot inside.

At 12:30am, the city air is cold and clear, punctuated by puffs of breath as people huddled in line along Smart Bar’s exterior exhale in anticipation. There is a restlessness among the ranks. Clubgoers hop from foot to foot, craning their necks toward the door – to the average passerby, this is an apparent consequence of arriving underdressed to avoid coat-check fees.

But to the rest of us, it’s a sign of what’s to come: The Black Madonna is home, and she’s brought a new friend along as part of a partnership with Smirnoff.

The Black Madonna’s real name is Marea Stamper, and she is as beloved in the dance music scene as she is polarizing; a mixture that, in sum, has made her ubiquitous. Combine raw talent with a refusal to conform to societal or artistic norms, throw in a hefty dose of intellect and biting wit, and you have the makings of a local – and ultimately global – icon.

As a Smart Bar resident DJ, and the club’s first-ever creative director in its storied 30-year history, Marea is an integral part of Chicago’s dance music family. But her rise to prominence over the past few years means she spends less time playing in the neighborhood and more time traversing the globe, delivering her talents to crowds at venues like Berlin’s Panorama Bar and London’s XOYO, where she recently launched a 12-week residency.

For the crowd shivering in the queue outside of Smart Bar on this frigid winter night, Marea’s return is a warm hug; they know exactly what kind of magic to expect from the woman who worked the club’s decks alongside legends like Derrick Carter and Frankie Knuckles on the regular. As DJ Mag USA squeezes through the venue’s entryway and down a narrow staircase, we’re quickly folded into a steamy room that’s bursting at the seams. 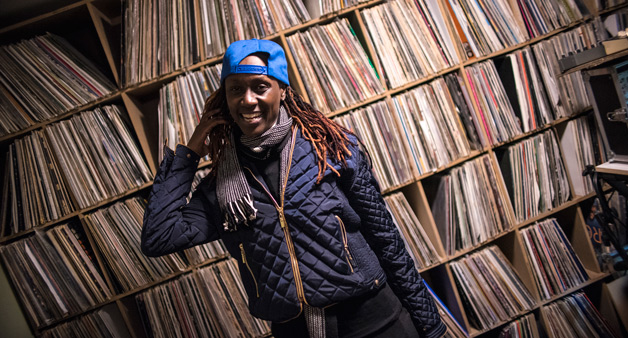 Known as Uganda’s first female DJ, Rachael began her 20-year-long career in 1996 as an emcee. Her musical selection reflects her background, and she introduces herself to Chicago by occasionally infusing her four-on-the-floor, house-driven set with Afropop songs that drive the room wild. She tells us she does this when she DJs in a new country: “I like to let people know what we have back home in Uganda. Give them a feel of it.”

If the dancefloor is any indication, America’s Midwest is definitely feeling East Africa. A cluster of people in front of the booth stretch their arms out toward Rachael and when she grabs their hands, the rest of the room elicits a roar. Beside her, The Black Madonna is grinning.

The two artists connected when they were invited to star in a documentary, Equalizing Music: Women Changing the Face of Electronic Music, the latest installment in a series from the Smirnoff brand that chronicles female electronic musicians, premiering on International Women’s Day. Marea and Rachael were separated by 7,600 miles; a vast expanse of ocean and land that houses cultural narratives as disparate as the spaces between them.

But the women were linked by their dedication to music, and to feminism. Then, Smirnoff brought them together to speak about the challenges they continue to face and, most importantly, how things can change in the future.

As The Black Madonna, Marea is uncensored, taking her political positions to Twitter on a daily basis with the kind of provocative wit that breeds as many diehard fans as it does detractors – “I threw my sign at pro-lifer harassing women at the march and I’m pretty sure America was briefly great again,” she tweeted on January 22nd, the day after the global Women’s March. Marea is also the founder of the all-women collective, DAPHNE, born in response to the allegation that there just aren’t enough female DJs for bookers to choose from.

Rachael’s approach is less brazen where social media is concerned, but no less brave: she is the founder of Femme Electronic, a movement that supports women in Uganda who are interested in learning to DJ and make electronic music. Prior to Rachael’s Chicago visit, Marea flew to central Uganda to meet her. In a country where a woman’s value has been culturally diminished over the course of generations, being the first female to do anything – and do it better than a man – is a bold step.

In Uganda, the girls kneel before their elders. The boys stand. “They teach you how to kneel… only the girls,” Rachael explains. “You grow up like that, thinking that you’re lower than the men or something.”

It is an astonishingly literal manifestation of inequality. Rachael says this isn’t an indictment against her countrymen – it’s ingrained in their culture – but she has always marched to the beat of her own drum, and that drum didn’t keep her on her knees. In her youth, she fell in love with music and never looked back. 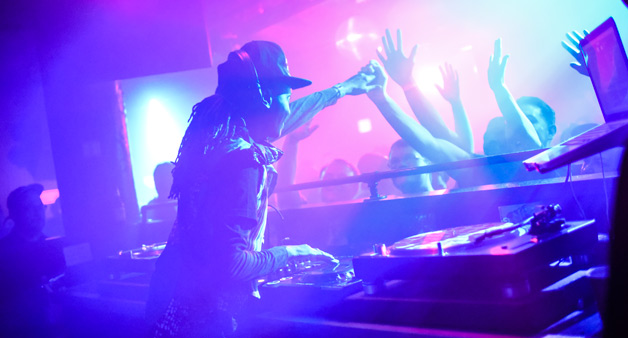 “I didn’t feel like I was jumping into an industry where there were only males," she shrugs. “I just did it.” Rachael is petite, with long, sun-kissed dreadlocks that she tucks beneath a baseball cap worn backward. We can imagine her as a headstrong child, stomping off to play records as she brushed the dirt from her legs.

Rachael notes that in Uganda, discrimination and massive wage disparity exist in every profession. “The chances that are given to men are not given to women. It’s not there. There’s no equality at all,” she shakes her head with a wry smile. It’s the reason she formed the Femme Electronic project.

Marea Stamper shares that sentiment, and while her outspoken nature has made her the involuntary figurehead of a movement – admired by DJs like Rachael and the hundreds of women who floodMarea’s email inbox every day with stories of their own –she’s hell bent on making sure the fight against gender inequality is inclusive.

“These problems are universal, they come from the dawn of time. And as I’ve said many times before, yes, we're experiencing these things because we’re living on Earth, which is where all the bullshit is. And so,it can't just be about me. It can't. And it's not," Marea states. She doesn’t want the fate of this movement to rise and fall with a single person – it has to be about more than her if lasting change is to occur.

It’s 2:30am when Marea takes over the decks from Rachael at Smart Bar, wrapping her friend in an embrace as the dancefloor applauds. A sea of sweaty faces, plastered with wide smiles and matted hair, turn toward the booth, ready to continue the party. Rachael is beaming, and when DJ Mag USA meets up with her and Marea the following day, Rachael tells us it was one of the best nights of her career: “It was quite intense, and very, very personal.” 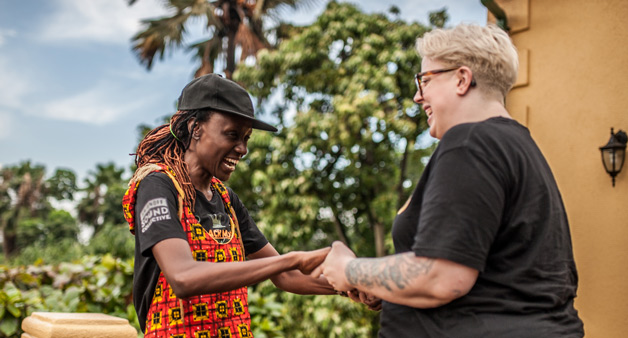 And while Rachael has never considered herself special simply for being a female DJ, she recognizes that this isn’t an opportunity equally afforded to her gender – in her country, or in this one. When the Ugandan press finally decided to declare her East Africa’s first female DJ, Rachael says she didn’t really care. “I was just doing my thing.”

But after finding herself surrounded by male artists at every gig, and seeing female acts occasionally emerge, only to disappear soon after, Rachael realized there was something amiss. “I said to myself, ‘no, no, no, I need to see some girls get into this with me!’” she recalls, slicing the air with a defiant shake of her hair.

That’s where Rachael and Marea are in sync. To the people who argue that the dance music world is a meritocracy where the cream naturally rises, and suggest that helping women might mean giving them something they don’t deserve, Marea quips, “Well Lord, spare me from that!” She rolls her eyes in disbelief. “The idea that this is a meritocracy is one of the most laughable, delusional cases of male mass hysteria in history… It would be hysterical if it wasn't pathetic. And it is through that kind of thinking that we enshrine men as maestros into the permanent collections of our imagination; and women never have access to that.”

Throughout the history of dance music, as in so many facets of society, women have been relegated to the postscript. They are ornaments, the “feat.” after a track title, despite the import of their roles. As Marea reminds us, ‘Deep Inside’ wouldn’t be ‘Deep Inside’ without Barbara Tucker. She suggests we need to reconsider how we value the roles different genders play – and why we value them the way we do – if we want to begin to move forward. 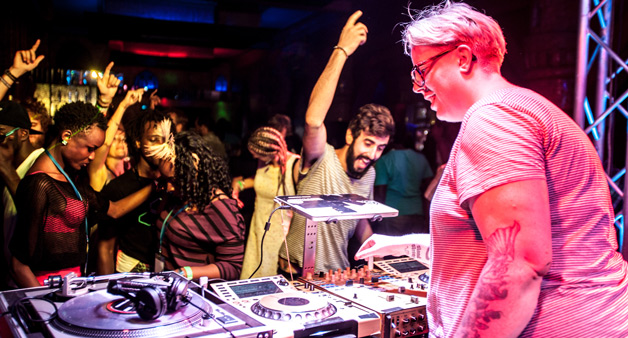 Rachael agrees, adding that she’s grateful to have met Marea. “The Black Madonna and I share a strong feeling about this inequality. It’s bigger than mine actually; she’s more vocal than I am. Very vocal!” Rachael laughs. “And I think we’re moving in the right direction. We’re going to create a village, and then a town, and then a country.”

To further push the industry to be more inclusive and create a shift, Smirnoff aims to double the number of female headliners in electronic music by 2020. On International Women’s Day, the brand’s push for gender equality is a three-fold initiative over three years called “Equalizing Music” which, beyond this documentary, the brand is encouraging other industry leaders to showcase female talent like Marea and Rachael.

When Marea drops her latest track, ‘He Is The Voice I Hear’, during her set at Smart Bar, it soars across the room like a ripple of disco-infused energy. An arrangement of euphoric strings and keys placed over a driving beat conjure a sense of forward-moving optimism; people on the dancefloor climb higher and higher together.

As for her own voice, Marea hopes the feminist fire continues to be stoked, long after she and Rachael have played their parts. “I'm happy to speak for myself, but I sure hope that you take this microphone from me and you hand it directly to someone else,” Marea smiles, her eyes glinting behind her black frame glasses, "Somebody younger, somebody more radical, somebody who disagrees with me. Give it to a young woman who hates my guts and wishes that I thought completely differently. Give it to somebody who wants to burn it down and start over. Because all of those points of view are important, even when they are not mine.”