THE KLF WILL RETURN IN AUGUST 2017 | DJMagAdmin.com Skip to main content

THE KLF WILL RETURN IN AUGUST 2017

The KLF — otherwise known as The Justified Ancients Of Mu Mu — have officially confirmed they will return this year following a 23-year hiatus.

Following a mysterious video earlier this week, which sparked rumours of the anarchistic outfit's comeback — a photo of a poster announcing the duo will release new music on 23rd August 2017 has been shared.

The news was revealed by Eastfolk Chronicle editor, Cally Callomon, who just happens to be KLF-member Bill Drummond's manager, and apparently found it whilst rambling about Hackney.

The poster also denies the group had any involvement with the video released this week, stating: “The Justified Ancients Of Mu Mu have zero involvement with any video clips, films, recorded music, documentary productions, biographies, West End musicals or social media chatter relating to the letters K L or F, now or at any other time over the previous 23 years”.

Before adding, “The Justified Ancients Of Mu Mu have no interest in anything that seeks to comment on, bounce off, glorify, debunk or resurrect their historical work.” 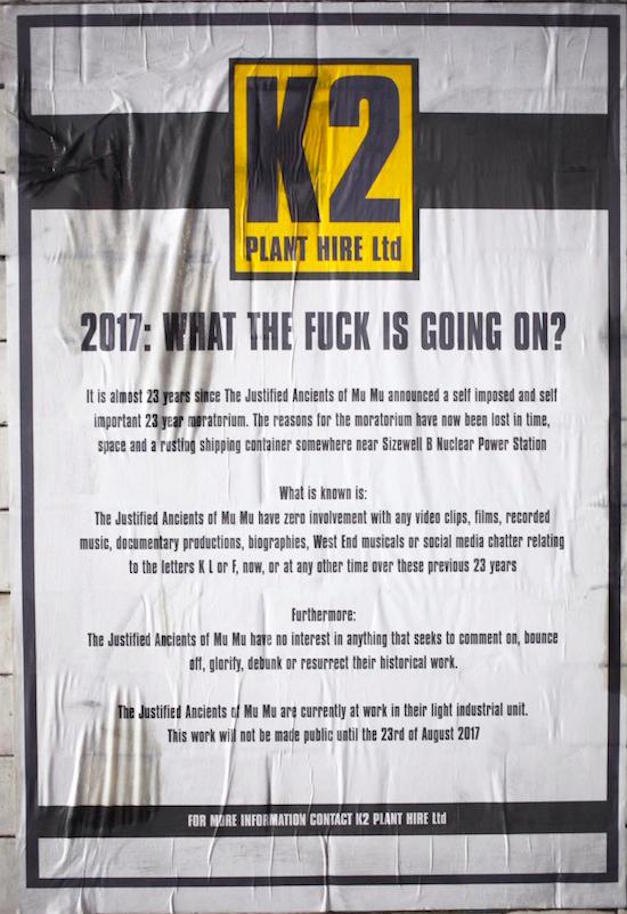 The KLF The Justified Ancients Of Mu Mu Hip-Hop Experimental