Trainspotting 2: Is It Worth It? | DJMagAdmin.com Skip to main content

Trainspotting 2: Is It Worth It?

Coming out of the Cineworld IMAX on London’s Leicester Square after the first UK showing of T2: Trainspotting, the critical mutterings are about ‘a nostalgia-fest’. But nostalgia isn’t always a dirty word. Whenever a group of old friends get together, there is always some reminiscing. It’s as natural as night follows day. It’d be impossible to attend a school reunion without talking about the past.

“What have you been doing — for twenty years.” Sick Boy’s retort to Renton, who’s returned to Edinburgh after two decades in Amsterdam, kick-starts this hugely enjoyable caper. The four iconic original Trainspotting characters are back, picking up where they left off when Renton (Ewan McGregor) ran away with the £16,000 they’d just scored in a fortuitous, dodgy skag deal. The reactions of the other three characters to Rents’ return was always going to be a strong theme in any sequel, and the trio pretty much react as expected. Do you think psycho Begbie (Robert Carlyle) was best pleased? NO SPOILERS!

So nostalgia is unavoidable in T2. The original cult film had such a huge cultural impact, any sequel was always going to have to refer back to it at some point. What is unexpected is just how much self-referential stuff is in there.

Instead of using hyper-real hallucinatory filmic devices (Renton diving down the disgusting toilet in the bookies, hallucinating deceased or jailed pals or dead babies when going cold turkey off smack in his childhood bedroom with its toy train wallpaper) that mimicked the prevailing hard drug use endemic in the first film, director Danny Boyle and team use nostalgia itself as a hyper-real device in T2. The drugs are different here. So there are flashbacks to the schoolyard and to when Sick Boy (Jonny Lee Miller) and Renton first took heroin together, and Spud (Ewen Bremner) even has a whole scene where he’s walking through the same cobbled Edinburgh streets as when he was scarpering from store detectives in 1996 — seeing ghosts of the past. 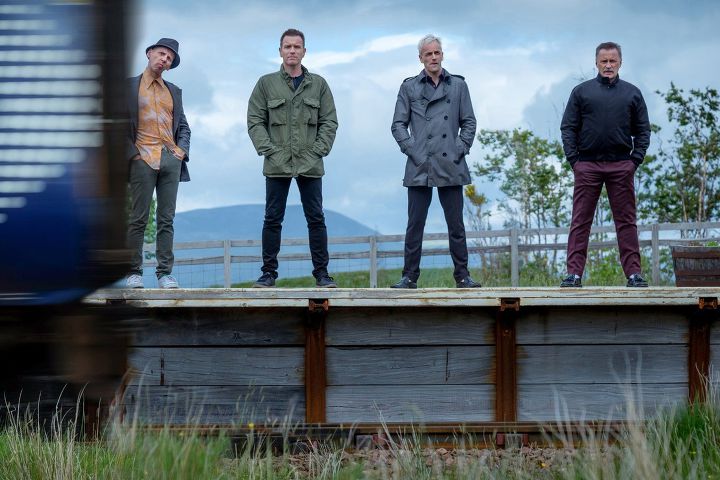 Other minor characters from the first film are reprised as well. Diane (Kelly MacDonald), Renton’s schoolgirl girlfriend, is arguably under-used, while Trainspotting author Irvine Welsh again makes a cameo as Mikey Forrester, a drug dealer made good. Others — Begbie’s missus, Renton’s dad — also make welcome returns, but despite the flashbacks and recollections this is a forward-facing work of art that sporadically uses technology (CCTV, smartphones etc) that scarcely existed in 1996 as quick-fix 2.0 plot mechanisms.

There are some genuinely hysterical laugh-out-loud scenes, a lot of ‘crisis of masculinity’ emotion and rollicking edge-of-seat high-jinks to contend with, plus the soundtrack — put together by Rick Smith of Underworld — is again top-notch, blending the recurrent (Iggy Pop, ‘Born Slippy’) with the new (excellent Edinburgh act Young Fathers, dubs of ‘Born Slippy’ etc).

Choose a fucking big screen to watch this on. If you’re a fan of the original movie, T2 is a must-see.