Elrow will host a stage at Tomorrowland this year, running over two consecutive Fridays, 21st and 28th July.

It’s the first time the famous Spanish party brand have appeared at the Belgium-based mega festival.

There is not currently any news on who will play the 10,000 person capacity Elrow stage, with a first announcement for Tomorowland’s line-up expected imminently.

The brains behind Belgian-based mega festival Tomorrowland are making a movie.

Yep, the EDM-heavy festival, that spawned the careers of this year's Top 100 DJs winners Dimitri Vegas and Like Mike, are commemorating their 10 year run with a documentary, that focuses on some of the key moments from the festival over the last decade.

DJ Mag took over the Surfcomber Hotel in Miami Beach yesterday for an epic, all-day knees-up with our favourite acts from around the globe! We’re here to celebrate Miami Music Week – an annual dance music conference that sets up shop in the Florida capital each March — with the waterside venue decked out with branded beach balls and a crystal clear swimming pool in the center.

It’s not the first time DJ Mag has thrown its famed MMW party at The Surfcomber, with past events featuring acts including MK, Kevin Saunderson and Bob Sinclar.

If the titles weren’t enough, then the sounds of Dimitri Vegas & Like Mike’s tracks ‘Tremor’ and ‘Body Talk (Mammoth)’ with their hippo-sized basslines, shrieking hyena riffs and drum-rolls that stampede like rhinos show that Belgian brothers Dimitri and Michael Thivaois are amongst dance music’s big beasts. And they’ve been roaming far and wide this year, playing across Mexico, Brazil and the UK, launching a new residency in Ibiza, and returning home to the Tomorrowland festival, which they’ve headlined for five years.

Dimitri Vegas & Like Mike’s ascent to the top of the Top 100 DJs poll will be forever intertwined with their role at their country’s Tomorrowland Festival.

The iconic Belgian party has itself grown over the past decade to become one of the world’s most popular events, though it was in 2010 when brothers Dimitri and Michael Thivaios were first selected to pen the festival’s anthem. World domination slowly but surely followed, for both the brothers and the festival.

“Tomorrowland is for sure the biggest pillar of our success,” says Dimitri, speaking to DJ Mag just after returning from the festival’s North American cousin TomorrowWorld, where they’d played to jubilant vibes on Saturday prior to it notoriously being washed out by rainy weather.

“Even in the early days it was a local legend, it was huge in Belgium and the countries around it. I mean, we grew up just a few hundred meters from the site where it takes place! It’s been amazing to watch it turn into such an international phenomenon.”

Both DV and LM have roots in dance music that stretches back to their teens, when they both made the pilgrimage to live and work in Ibiza; first Dimitri, followed by his younger bother Mike, and both effectively changed forever by Erick Morillo’s Subliminal residency at Pacha (“You come to this island where everything is about love and peace… For us it was such a game-changer”).

Returning to Belgium around a decade ago to launch their musical partnership (“I said to Dimitri, move in with me and my girlfriend, we’ll build a studio in one of the rooms and you can sleep in the studio,” Mike laughs), their first big break came when their remix of ‘Work That Body’ caught the attention of Axwell. 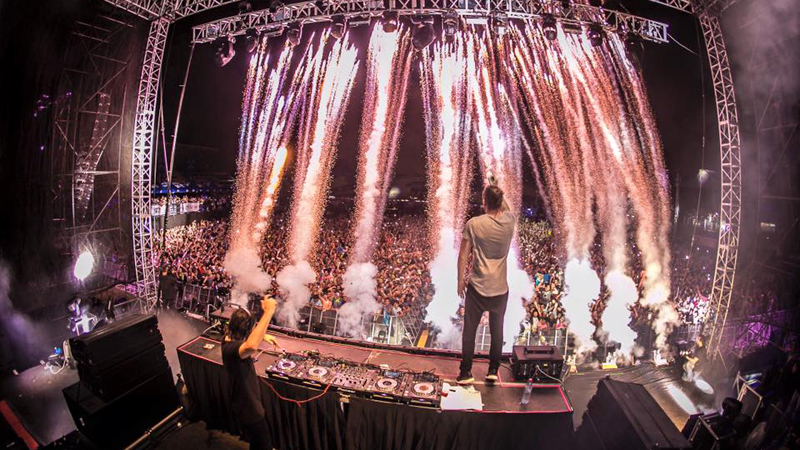 However, it was their role in shaping the soundtrack for the 2011 Tomorrowland after-movie that really marked the turning point for Dimitri Vegas & Like Mike.

“We spent weeks making the perfect soundtrack,” Dimitri tells DJ Mag. “We all sat together with the team of Tomorrowland and said, ‘OK, this year we’re gonna do something next level’.”

The extra effort paid off, as the after-movie chronicling the extravagant spectacle of the three-day festival was magnificently producer — enough to attract the world’s attention. All those sweeping aerial shots, the ecstatic punters, the insane stage designs, the emotion and excitement. It represented somewhat of a dance zeitgeist moment, racking up over 70 million YouTube views to date.

The pair had several of their tracks featured on the after-movie, and their party-ready sets have since become synonymous with Tomorrowland’s main stage bombast. Mike hyping the crowd on the mic, spraying champagne from the stage, and this year stopping the music to part tens of thousands of punters in the amphitheatre, before drawing them together into a heaving moshpit.

However, their residency on the main stage of their country’s flagship festival only tells part of the story of what’s elevated Dimitri and Mike into the #1 spot of the Top 100 DJs poll.

To give an idea of the sort of crowds they’re drawing, their annual Bringing The Madness stadium shows during December in Belgium are set to shift an unprecedented 60,000 tickets across three evenings this year.

And while they’ve run their own Smash The House label (and associated Smash Artist Services booking agency) since 2011, they took things independent last year after a long-running association with Spinnin’ Records. They since enjoyed their biggest hits yet.

“Artistic control is the most important thing, and we wanted to keep it in the family,” says Dimitri, pointing to the success of Armin van Buuren and Steve Aoki, and their respective Armada and Dim Mak empires, as examples of how successful this approach can be.

It bore fruit this year with their Ummet Ozcan collaboration ‘The Hum’, a killer main stage anthem (helped a little by a suitably excessive video featuring notorious Hollywood actors Charlie Sheen and Jean-Claude Van Damme) that perfectly captures the hard kicks and heavy drops they’ve been using to blow up the main stages in recent years.

As it turns out, it’s a sound influenced more than a little by Dimitri’s early days in the Belgian hardcore scene (not unlike how Mike’s trademark antics on the mic during their shows was informed by his own early adventures in Dutch hip-hop).

“‘The Hum’, it went crazy,” Dimitri says of the track, which has inspired hearty chest-beating responses since its debut at Tomorrowland in 2014, rushing to #1 both on the Beatport and the Belgian national charts upon release. “We expected it to be a big record, but we didn’t expect it to go that crazy. We’d had the idea a few years ago to go back to my past, and we thought if we brought back the hard kicks, people will go nuts for it. And it seems we weren’t wrong.” 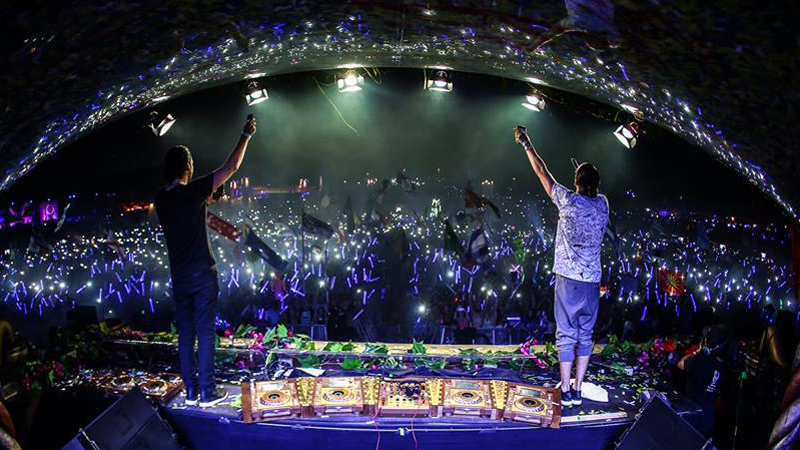 Otherwise, on the complete opposite end of the spectrum, the gentle piano house of their collaboration with R&B star Ne-Yo saw them locking down a crossover radio smash, which spent a whopping ten weeks at the top of the Belgian charts. The pair say the idea for the track had gestated for over a year, before a studio session with Ne-Yo saw it nailed down swiftly.

“We were showing some tracks to Ne-Yo, and he heard that hook and said, ‘I’m gonna do this’,” says Mike. “And boom, an hour later…”
“He wrote this amazing topline on the top of it, and the rest is history,” says Dimitri.

“For us, it was the chance to do something different, and mainly to show people again that we release music that we love, music that we believe in… And the most important thing about ‘Higher Place’ is that it’s a song; we decided against going with a drop, because we wanted a song.”

It’s a sign of things to come — in terms of their long overdue artist album, they’ve given a tentative release date of early next year. They’ve spoken often of the experimental directions they’ve been taking in the studio, with more than a couple of mystery records sneaking into their sets, though they’ve been intentionally keeping their cards close to their chest.

“We’ve written over 70 tracks, we’ve basically finished over five albums but never released them,” says Mike. “One or two tracks survived from each of those, and we’ll make the final cut soon.”

“We wanted to do a diverse collection of music that we really love, that we’re 100 per cent behind. Is it gonna be a downtempo album? No,” says Dimitri. “But there’s a couple of tracks really out there, not linked to anything, they might even start a new genre.

And we want to have the whole story that we wanna tell completely ready. “The downside is that a lot of fans get a little frustrated because they might hear some of this music in our sets, and they want to see the music released,” Dimi continues. “But we also have this secret box of tracks, and that’s gonna be the album.”

The duo’s sound has certainly evolved in sync with the main stage during their ascent, their early remixes sporting a groovy electro-house flavour, in contrast to the EDM mayhem that characterises their sound today. While Dimitri concedes his main stage compatriots have been “playing it safe” this year, he says the next evolution is always just around the corner.

“In a sense, it’s only one track away,” Dimitri tells DJ Mag. “There’s still a lot of artists experimenting, and at a certain point there’s gonna be that track that turns everything over again. But it doesn’t come on demand. It’s the responsibility of the DJs and producers to challenge themselves into doing something different, and keep on making original tracks with the dancefloor in mind.”

Riding high at the top of the pile, party-rockers Dimitri Vegas & Like Mike are going to continue smashing the house for a long time to come. 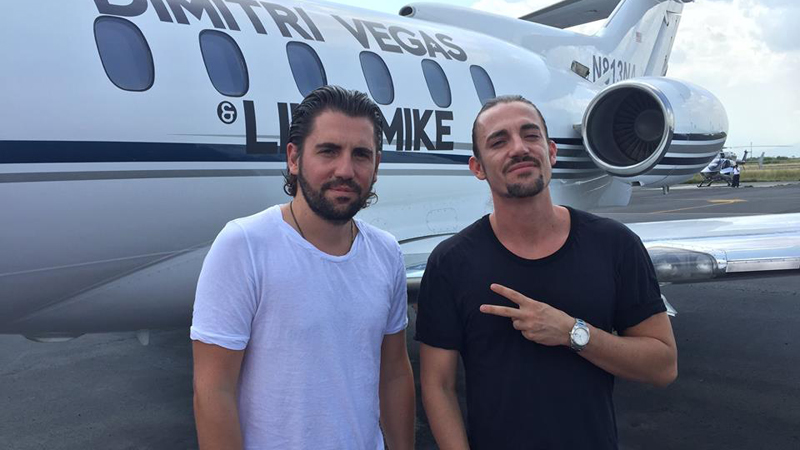 Submitted by admin on Mon, 2015-10-19 14:27
Style:
Whatever we want to play.
Best known for:
Smashin’ The House.
Tune of the year:
Major Lazer ‘Lean On’.
From:
Tomorrowland
Breakthrough DJ/producer of 2015:
Lost Frequencies.
What’s the most important skill a DJ should have?:
Feeling a crowd and entertaining them.
Is the future still bright for EDM?:
For sure. We feel the interpretation of this term is too narrow, let’s just call it electronic music.
Does the constant travelling and DJ lifestyle ever take its toll on you mentally?:
The travelling does get old, it’s an intense life sometimes, but we’re very happy that we get to do what we love.
What cause is closest to your heart?:
Both human and animal rights, and environmental conservation.
Which club would you like to bring back from the dead?:
Cream at Nation [in Liverpool, UK]. It’s a clubbing institution that will sadly close its doors after more than 20 years. We’ve had so many great nights there!
Why aren’t there more women in the Top 100 DJs poll?:
It’s great to see more and more female DJs taking up the challenge, we actually just signed an amazing talent called MATTN who we expect to do great things in the next few years.
What do you think of DJs who use ghost producers?:
There seems to be a lot of confusion around the topic. Sometimes artists get help in mixing, songwriting or additional production; it’s not exclusive to electronic music or any other genre for that matter. Ultimately, if that extra pair of hands makes the final sound of the record better, then it’s in everybody’s best interest to go down that avenue. But what’s important is clarity around how that collaboration works, and everybody involved properly credited and paid for their efforts.
Top 100 DJs2015Dimitri Vegas & Like MikeDVLMEDM
back to top
DJMAG
all sections